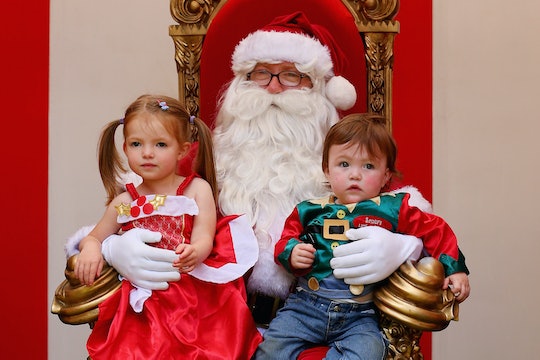 For many families, it's a time-honored holiday tradition: Waiting in line for hours at a hot and crowded mall so that proud parents can hoist their (possibly terrified) tot onto the lap of a total stranger in a fake beard. If you really think about it, the whole thing is pretty bizarre — maybe even borderline barbaric. Which begs the question: Should we force kids to sit on Santa's lap?

You might think this annual photo op is harmless enough, but experts warn that some kids could be traumatized by the experience, particularly if they're reluctant to get up close and personal with old St. Nick's stand-in. And it's important to remember that just because they seem enthusiastic about the idea in theory doesn't mean they won't get cold feet when they make it to the head of the line.

"Some children, especially kids under the age of 5 years, may get upset and cry by a visit to Santa," says Dr. Fran Walfish, family and relationship psychotherapist and the author of The Self-Aware Parent.

"The reason is because of the costume, mask, makeup, false beard, rosy cheeks, and deep 'Ho, ho, ho' voice," she explains.

"Toddlers have not yet mastered the concept of object constancy. It is hard for a young child to imagine that a human man can remain a human person while wearing a costume. In other words, the toddler sees Santa in his costume and believes Santa is a walking and talking alien in a costume. The child doesn't understand that Santa is a real person who went in the other room and put a costume disguise on."

"It's someone they don't know who may smell or feel funny to them and it's in a public setting with strange people and sounds all around."

Well, that would indeed be terrifying! When you look at it from a small child's perspective, it starts to seem like a miracle that any kids actually hop up and rattle off their wishlist with no reservations. Still, some parents — knowing their child isn't in any actual danger — might be tempted to press the issue, especially if they've wasted half the day waiting to fork over a bunch of cash for a cherished memory with Kris Kringle. Understandable, to be sure, but a mistake.

"If your child is upset, afraid or cries when visiting Santa don't force the visit," says Walfish.

"Instead, comfort your young child. Be sure you cozy up, put your arm around your child, and give your child permission to express his fears and anger at you for taking him to see Santa before he was ready. Tell him you won't do that again. Next time you will ask him if he wants to visit Santa. If he says no you will respect his wishes. An attuned, sensitive parent follows her child's lead."

Besides potentially giving your kid nightmare fodder for life, making him sit on Santa's lap when he doesn't want to also sends the wrong message: That they can't trust us to take their feelings seriously and meet their needs on an unconditional basis.

"If we minimize their emotions (by telling them sitting on Santa's lap is no big deal, for example), we teach them to stuff their feelings. We leave them feeling alone in a sea of emotions. All feelings are important, and it's important for parents to put their own needs aside for a moment to help their kids through difficult moments," Katie Hurley, LCSW and author of The Happy Kid Handbook: How to Raise Joyful Children in a Stressful World wrote in Parenting.

All that said, there might still be a way to salvage the big moment if your kid refuses physical contact with Santa. Let go of the lap idea, suggests Shane.

"Instead, see if you can get Santa to hold a beloved toy and have the child hold the toy too. Another option is for the parent or an older sibling to hold the child while standing in front of Santa and then backing up so that the child is near Santa without realizing it or having to directly engage with Santa. This keeps everyone safe and happy, which increases the likelihood of getting a great photo!"

I have three kids whose ages range from 3 to 16, and so far none of them have ever sat on Santa's lap. Sure, I offered to facilitate such a meeting, but none of them ever even entertained the possibility. The oldest two were content to observe him from afar, while my youngest recently decided that he felt comfortable enough to stand near Santa and tell him what he wanted from a safe distance. Santa should be fun, not scary. And I don't ever want my kids to feel like they're not in control of their own bodies.

Also, guess what? If you don't make your kid sit on Santa's lap, you don't have to pay for an overpriced photo package. Ho, ho, ho!