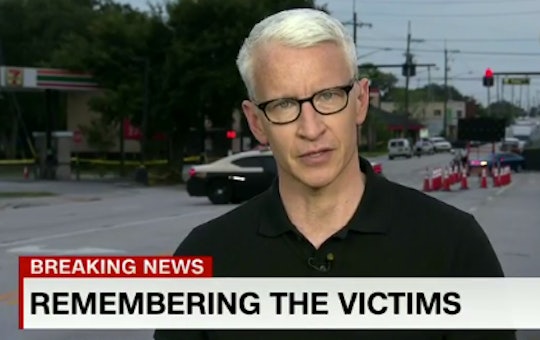 The world is still mourning and grappling with the horrific, deadly mass shooting that targeted the LGBTQ community at Orlando gay nightclub Pulse early Sunday. The gunman killed at least 49 people and left some 53 people wounded. On Monday evening, journalist and CNN anchor Anderson Cooper addressed the deadly shooting during a live broadcast of Anderson Cooper 360°, reading off the names of each of those victims. In total, the reading lasted for nearly seven minutes. If you're wondering why you should watch Cooper's Orlando victims tribute all the way through, take everyone's word for it —the video is completely moving and so important.

Cooper's heartfelt tribute to the victims who lost their lives at Pulse over the weekend, as well as their families and friends, was little more than what it sounded like. In the seven-minute video, Cooper read the full names of the victims, plus any available information on their character. He also poignantly noted that he would not say the gunman's name – a system that more news media organizations, and the FBI have adopted.

"You will notice that I'm not using the killer's name, and I will try not to do that," FBI Director James Comey said during a news conference according to USA Today. "Part of what motivates sick people to do this kind of thing is some twisted notion of fame or glory, and I don't want to be part of that for the sake of the victims and their families."

Cooper kicked off the show by refusing to acknowledge the gunman or show his photo as well. "We begin tonight with their names, the names of the 48 out of 49 people who have so far been identified," Cooper said. He continued, "There is one name I want to tell that you will not hear in this broadcast tonight – one picture of a person you won't see. We will not say the gunman's name or show his photograph, it's been showed far too much already."

Cooper, rightfully so, spoke to the importance of remembering the victims and their stories. As Cooper noted, they were real everyday people with families, friends, loved ones, careers, and aspirations, whose lives horrifically got cut short.

"We want to try to keep the focus on where we think it belongs, on the people whose lives were cut short, and we're going to start tonight by honoring them," Cooper said. "They're more than a list of names. They're people who loved, were loved, they're people with families, and friends and dreams."

Since Sunday, horrifying videos, and photos of the Pulse shooting have been released. As the world grieves the senseless loss of the victim's lives, it continues to be important to honor them by hearing their identities and memories about them. With any luck, no one will ever remember the shooter — instead, they'll remember that list of 49 names.