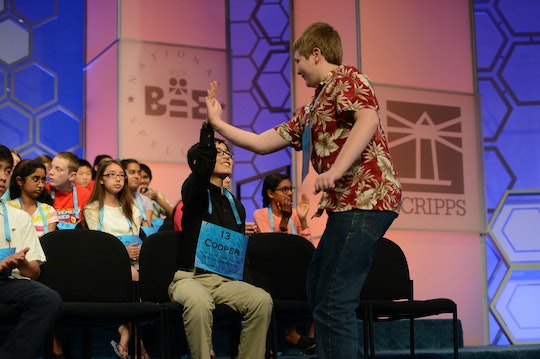 Why You Should Watch The Scripps Spelling Bee With Your Kid

On Wednesday, 285 children ages 6 through 15 are currently taking the stage in National Harbor, Maryland for the 88th Annual Scripps Spelling Bee. These are just the preliminaries — no more than 50 contestants will advance to the two rounds of finals, scheduled in two blocks. The main event — the round where the winner will be named and the confetti drops from the ceiling — will be the round of finals beginning at 8 p.m. Eastern Time Thursday night on ESPN. While there's plenty of television to choose from on Thursday night, here's why you should watch the Scripps Spelling Bee with your kid.

Firstly, it's no shock that families watch a lot of TV. But how often is your family actually watching TV together, at the same time? And how often are you and your family watching something quality together — not just programs that may as well be Twinkies for the brain. The Scripps Spelling Bee is a totally family-friendly event to watch and it isn't the snooze-fest you might erroneously think it is: There's a shocking amount of spelling bee drama and suspense on that stage full of pre-pubescent spellers.

Here's five more reasons why you and your kids should watch the Scripps Spelling Bee together.

1. Show Your Kids That Being Smart Can Be Cool

If your child has ever been worried about being labeled a "nerd" or a "geek" by their peers, the Scripps Spelling Bee is the perfect example to show your kids that those aren't necessarily bad words and they can reclaim them as points of pride. What other competition out there rewards kids for correct spelling with more than $40,000 in prizes and gives them a national platform to showcase just how smart they are?

While this might not be the Olympics or the Super Bowl, the Scripps Spelling Bee brings out a ton of fierce competition between the young contestants. And, contrary to what you might think, spelling bees are a great way to build up healthy confidence and self-esteem. Speaking to Education.com, Merriam-Webster senior editor Linda Wood said, "Even when a child gets a word wrong, he or she is not usually devastated, as some would believe. They are actually enjoying themselves."

As much as the 2013 spelling bee comedy Bad Words would have you believe, rarely does a spelling bee end in fisticuffs. In fact, the Scripps Spelling Bee is a shining example of what good sportsmanship looks like — and how much children will support one another whether they win or lose. It's pretty refreshing, actually.

4. Learn Some New Vocab With Your Child

With a carefully curated list of words from which to spell, you're bound to pick up a neat new word or two. Take the above winning word from 2011: cymotrichous. (Hint: You might say Hermione Granger or Kate Hudson are cymotrichous). That's just a fancy way of saying "having wavy hair."

5. Help Them Develop a Love of Learning

The coolest thing about the Scripps Spelling Bee is that you can basically point to your TV screen and tell your child: "See? Those are some kids who love learning and school." It gives you the chance to help normalize a concept — liking school — that is otherwise portrayed so negatively in the media.

And you can also tell your kids that many of the spellers who compete go on to have successful careers in medicine and the sciences. Speaking to TIME magazine, director of the 2002 documentary Spellbound, Jeff Blitz said: "Something about the kind of brain that’s not intimidated by the dictionary in childhood seems well-suited to the work of medicine in adulthood."