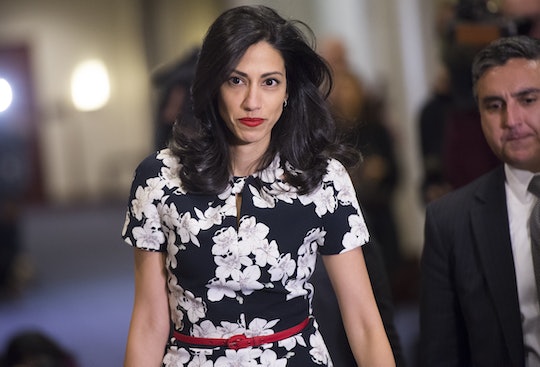 Ideally, I wouldn't have to explain why one adult isn't responsible for the behavior of another, but unfortunately, that's not the case. On Sunday, The New York Post published an article and accompanying photos claiming to prove that former congressman Anthony Weiner had been caught sexting a woman besides his wife for the third time. This latest turn came with a new, improved twist, though; one of the photos — a crotch shot in which the subject is wearing boxers — allegedly features Weiner's 4-year-old son curled up next to his dad. Obviously, this is all his wife, Huma Abedin's fault. (Romper reached out to Weiner for comment, and did not immediately hear back.)

It sounds ridiculous, of course, but somehow, people are making this all about Abedin (Donald Trump's actually making it about Abedin's boss, Hillary Clinton, but that's a whole different can of worms). One headline announced, "Humiliated Huma FINALLY dumps sexting Weiner," as though she'd personally promised them that she was going to leave him two years ago. And Rush Limbaugh, that bastion of feminism, also weighed in, according to Media Matters. "She's presumably she's going to be Hillary's chief of staff," he said on his radio show. Wait for it... "But she has not been chief of her husband's staff." Zing! I thought he was going to go for the low-hanging fruit with a Weiner/wiener pun, but he went with a different penis euphemism! Classic Limbaugh.

But seeing the public get overly-invested in someone else's marriage is old hat. And it's something Abedin is no doubt acutely aware of, seeing as how she was working for Clinton during the height of the Monica Lewinsky scandal, when America was downright furious that Clinton didn't divorce her husband after he admitted to having a relationship with White House intern Lewinsky. In August 1998, then-President Bill Clinton addressed the nation on TV, saying, "Indeed I did have a relationship with Lewinsky that was not appropriate. In fact, it was wrong. It constituted a critical lapse in judgment and a personal failure on my part for which I am solely and completely responsible."

But the alleged inclusion of Abedin's son in one of the photos means that not only are her wife skills being called into question, her parenting skills are, as well. From the Washington Post: "And for the third time, his questionable decisions are ensnaring his wife, one of Hillary Clinton's top aides, by raising questions about her decision to leave their son in a potentially dangerous situation."

What questions would those be, exactly? Maybe, "Did Abedin anticipate that her husband might take partially clothed d*ck pics to send to a stranger at three in the morning, and that her son might wake up and come into his parents' room during that time, and that her husband would include the child in said d*ck pics?" If that's question, I'll go out on a limb and say no, she did not. Even though Weiner's been known to trade NSFW photos on Twitter in the past, no reasonable person would assume that a future episode might somehow involve his child. I'd argue that only a disturbed person would even imagine that scenario.

No, I think the real question, if I'm interpreting that dog whistle correctly, is "How dare Huma Abedin, a woman, not stay chained to her child 24 hours a day? How dare she hold a job, and allow her husband, a man, to care for his own son?" It's as though some people believe Abedin "should have known better" and this is her karmic punishment for being a "breadwinner." In an interview with Vogue just two weeks ago, Abedin spoke of the guilt of being a working mother, and credited her husband's willingness to be "a full-time dad" as the reason she was able to work long hours as Clinton's aide.

Abedin shouldn't feel guilty (or feel compelled to confess to feeling guilty) for having a job, or expecting her co-parent to actually parent. Look at Clinton's opponent, Donald Trump, who has repeatedly and openly bragged about how little involvement he had in his children's upbringing. Many families have an agreement that one parent will be the primary caregiver while the other is the primary earner, and there's no reason for their genders to be a factor. And the implication that Abedin should have somehow foreseen that her son might end up included in some nasty Twitter DMs is patently absurd. Not even a writer for Law & Order: Special Victims Unit could have dreamed that up. Stop blaming a woman for something her husband did, and let her get back to her job and her life, already.