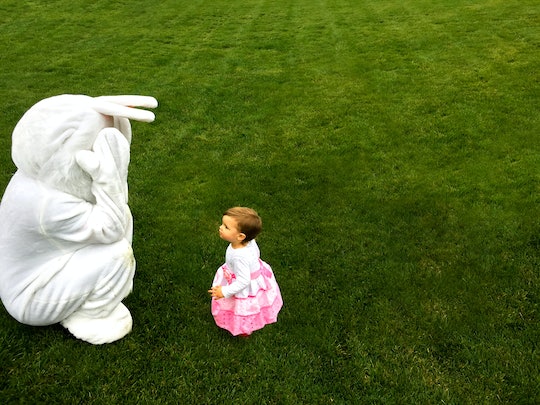 Why You Shouldn't Force Your Kid To Sit On The Easter Bunny's Lap, Per Experts

Seasonal holiday photos are a quintessential tradition in many families. Whether it's the ugly sweater or Santa photo in the winter or the "what-I-did-on-summer-vacation" in the hot months, for many of us, they're as ingrained a tradition as fireworks on the Fourth of July. But what happens when we force our kids to participate in a photo op to get that time-honored snap? Experts advise against putting resistant kids on the Easter Bunny's lap no matter how Insta-worthy you think it might be.

"Off the top, I'd say that kids shouldn’t be forced to do anything, typically, beyond the things that are non-negotiable for their safety, but in this instance in particular, you're asking them to step into a situation that is unfamiliar to them, and thus it is scary," says Dr. Maureen Healy, leading child psychologist and author of The Emotionally Healthy Child. And seriously, look at it from a pint-sized POV: here's a totally-unlikely human-sized replica of a rabbit, waving at them and approaching them silently with giant paws and an anthropomorphic bow tie. Wouldn't you be utterly freaked out?

Healy says that when your kid is afraid of the Easter Bunny and resists getting into the picture, heeding that concern shows that you're on their side and reinforces the authenticity of your bond or connection with your child. That's a feel-good moment that runs deep with your child and shows them that you're listening to them and are there to protect them.

If your child is open to being near the bunny, but just not interested in sitting in his lap for the traditional pose, you might consider offering options. Ask if they would stand next to the bunny, or in front of the bunny, Healy advises. At the end of the day, though, the choice of whether or not to participate should be left up to your child.

"This simply isn’t one of those times where overriding your child has any benefits, as, for example, there would be if your child was trying to put his or her hand on a hot stove," Healy adds.

Agency over one's own body is the key to concerns around this issue, agrees Christy Keating, CEO of Savvy Parents Safe Kids, a national child safety and education institute. "One of the concerns with forcing children to sit on anyone’s lap — whether it’s the Easter Bunny, Santa, or even Grandma, is that we're teaching our kids that they don’t have autonomy over their own bodies, and that what an adult wants them to do is more important than how they feel," Keating says. "I caution parents to think is that few seconds of a bunny photo worth the message that we’re sending our kids — what I want you to do with your body is more important than what you want to do you with your body."

Keating has a unique perspective on the matter: Not only is she a Certified Parent Coach, but she's a licensed attorney who spent more than two decades working in one of the country's largest prosecutor's offices — spending the latter part of her career in public service putting sexually violent predators behind bars. As such, she says it's best to reinforce children's "gut instincts" regarding what's safe and comfortable for them and what's not.

"Even though we as adults might know that posing for a picture with the Easter Bunny is a safe situation, when we don’t let children trust their own feelings, that can put them in a dangerous position down the road when there is someone with nefarious intent," she says. "As parents, we want them to trust that uh-oh feeling when they get it."

Healy says that listening to children when it comes to their instincts is important year-round, not just at holidays. That means that what's true of the Easter Bunny is equally true of Aunt Stella or Uncle Bart when it comes to honoring your kids' feelings about physical closeness.

"It’s one thing to teach etiquette, and teach your kids how to greet other people properly and respectfully, but a child should not ever be forced to touch, whether someone is related to you or not," says Healy. "Children need to be able to trust their feelings about what to do with their own body. You want to help a child step-by-step get more comfortable in new situations, and gain confidence, and gain courage in new situations."

Options are the answer when it comes to non-holiday-related greetings and your kids. Before introducing your children to new people, give them options for greetings and goodbyes that they're comfortable with, such as handshakes, fist bumps, high fives, a simple wave, and the like. Encourage etiquette, but recognize that your child may never be "a hugger," regardless of what your family expects — and that's fine.

"When introducing a new person to your child, say 'Hey, this is Aunt Betty, I love her, can you say hi, would you like to give her a fist bump?' — there you've identified who the person is, that they're safe, and given an option for a greeting," Keating says. "Work with your kids to come up with some socially appropriate options, and back your kids up in this."

So there you have it: A picture may be worth a thousand words, but instilling a sense of trust in your child and letting him or her know you're on the same team when it comes to safety is worth more than 15 minutes of fame on the 'Gram.