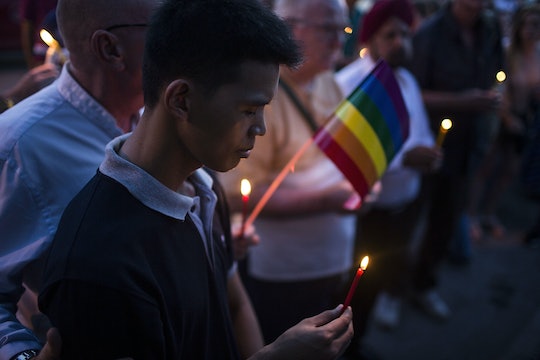 Why You Shouldn't Listen To The Pulse Nightclub 911 Calls

On Tuesday, the Orange County Sheriff's Office released multiple 911 calls from the mass shooting at Pulse Nightclub in June, during which gunman Omar Mateen killed 49 people and injured 53 more. Though the calls are available to the public, I haven't listened to them. Neither should you.

The callers include frantic loved ones trying to ensure the safety of their trapped family members and friends, neighbors calling to report the nearby panic, and victims calling from inside the club, according to ABC. The recordings are sure to be devastating. The people making these calls were terrified, fighting for their lives or for the lives of those they loved. Surely, as they dialed 911, they weren't thinking about the public devouring their every word later on. They never intended for hordes of strangers to listen in on their most desperate moments. Barring some really good reason (like your job being to make sure the response procedure was as effective as it could have been), we should respect the privacy of those who made these calls.

In the wake of a crisis, sometimes an urge springs up to learn everything about it, as if doing so can prevent a similar event from someday happening to us. But we can't control that. So what do we actually gain by fulfilling our morbid curiosity?

It reminds me of an article that Steve Kandell wrote for Buzzfeed when the 9/11 Museum opened, called "The Worst Day Of My Life Is Now New York's Hottest Tourist Attraction." His sister died in the attacks, and he talks of visiting the museum, being nearly overwhelmed by displays of:

Smoke and fire and ash and twisted metal and the husk of an ambulance. Tattered flags, handwritten pleas for help, missing persons flyers, screams. Dusty, ownerless Topsiders encased in glass. A soot-coated bike rack, as it was found. Countless personal artifacts, artfully destroyed.

He went before the museum opened to the general public, so the only other people there were also connected to the tragedy, and he writes,

The fact that everyone else here has VIP status grimly similar to mine is the lone saving grace; the prospect of experiencing this stroll down waking nightmare lane with tuned-out schoolkids or spectacle-seekers would be too much.

I can only imagine that, with the release of these calls, some of the people who lost loved ones at Pulse might be feeling something similar.

This fascination with the details of a tragedy, not because we're going to use them to change the world in any positive way, but simply because they exist and we can consume them, what good does it do us or the victims?

(Actually, I do have another caveat. If you're a lawmaker who still supports easy access to assault rifles, you should have to listen to every single minute of these calls.)

But for the rest of us, better to remember the victims in other ways, not as they were in the worst moments of their lives. Read about their triumphs, their passions, and celebrate those. Isn't that what you would want for yourself?