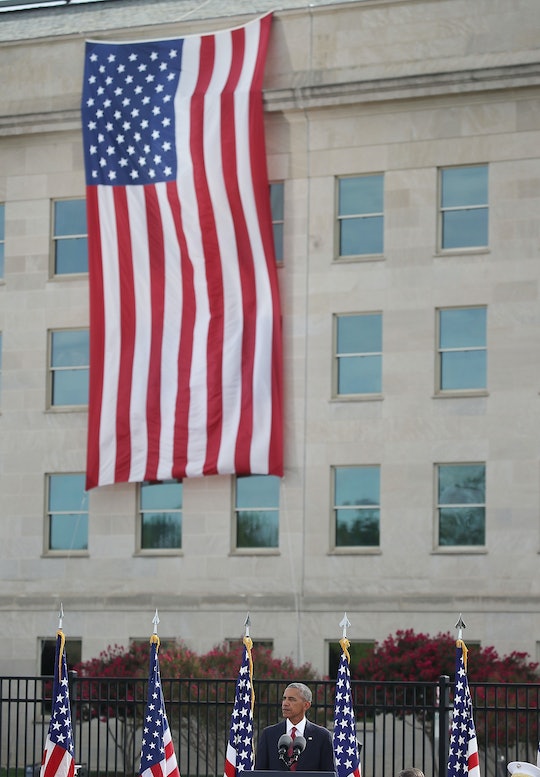 Why You Shouldn't Post Photos From 9/11 On Social Media

Shortly after Sept. 11, 2001, I remember seeing a photo from the World Trade Center terrorist attacks that would stick with me for life. It was a shot called Falling Man, which was taken by Associated Press photographer Richard Drew, and it showed a victim falling from the North Tower shortly after it had been attacked. The reaction viewers have to Drew's photograph is often visceral: It's disturbing, horrifying, and heart-wrenching to look at — and it's one of many 9/11 pictures you shouldn't post on social media.

The drive to remember the 9/11 attacks and commemorate the victims today isn't misplaced, even for those who lived far away or whose lives remained personally untouched by the incident. While the Sept. 11 attacks were a New York tragedy, they were arguably one of the first terrorist attacks that shook the entire world through digital media. Videos and photos were shared for hours on television and online, and the world watched on in horror. This was new territory for the western world, and for many Americans, the date as a marking point: before Sept. 11, and after. Before the war against Afghanistan, after. Before terrorism, after. The need to remember, the drive to mark the date, is understandable, and they say pictures speak a thousand words, right?

The thing is, for many people, 9/11 was a personal tragedy. For those who lost family members in the disaster, walked into the towers to help strangers, or witnessed their city on fire, living 9/11 just once was more than enough. Scrolling through Facebook, Instagram, or Twitter shouldn't have to be a minefield of unwelcome memories for them, and it's easy enough to keep photos off of social media. One can honor the victims of 9/11 or post personal memories without including graphic footage, and it might save someone else some pain.

That's not to say you can't search out the pictures of 9/11 on your own. People mourn and remember in their own ways, and for many, the photos from 9/11 — or pictures of Syrian refugees or scenes of war — can make an otherwise unimaginable tragedy real, which is not a bad thing by any means. Pictures of a tragedy can motivate a person to take action: to raise funds for survivors, to volunteer, to make a personal change.

Photos can be incredibly powerful — in ways both good and bad. When it comes to tragedies that have altered people's lives, however, perhaps it's best to save your sharing for another time.