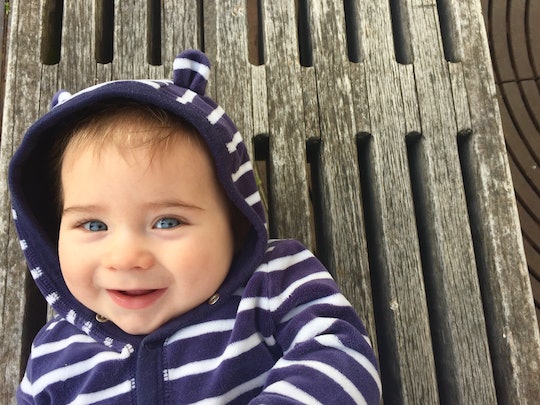 Here's Why Your Baby Grunts

A soft cooing from her newborn has been known to make a mother weak in the knees, and rightly so, because can everyone just go ahead and confirm that baby noises are the absolute cutest sounds on the planet? But how about when those sweet sounds become a little more intense — should you start to worry? If you're wondering why your baby grunts, you're not alone. Those can sound uncomfortable, so should you do something about it?

According to a Healthline article written by Jacquelyn Cafasso and medically reviewed by Karen Richardson Gill, MD, newborn grunting is usually related to digestion. Your baby might have gas or may be working on a bowel movement, which is a skill they didn't have in utero and one their bodies must learn to accomplish. In the process of passing gas or poop, infants tend to bear down on their diaphragms against their closed voice box, creating a grunting sound.

Over time (usually within a few weeks of life) your baby will learn to relax their pelvic floor while pushing with their abdomen, making relieving easier and quieter, according to an article in the Journal of Pediatric Gastroenterology and Nutrition.

But it is important for parents to be aware that in some instances of infant grunting, particularly when observed immediately after birth, digestion may not be the culprit at all. In an exclusive interview with Romper, Jamie O'Day, co-owner of the Boston-based private nursing company Boston NAPS, says grunting in a newborn may be a sign of respiratory distress (difficulty breathing).

O'Day tells Romper that if grunting begins shortly after birth, a nurse may recommend the mother do some extra skin-to-skin time with her baby, as the physical contact has been proven to regulate a newborn's breathing. She goes on to say that if the grunting is severe or there are other signs of respiratory distress, then further assessment and monitoring may be necessary.

If you're concerned about the frequency and/or severity of your baby's grunting, talk to their pediatrician about your observations. But more than likely their little caveman grunts are nothing that a few snuggles and some dirty diapers can't fix.