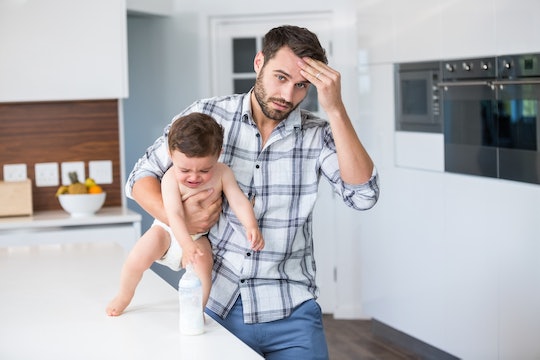 Why Your Baby Hates Feeding From A Bottle, According To Science

Whether you are worried about going back to work or just need some time alone, it can be very frustrating if your baby refuses to feed from a bottle. Your level of concern skyrockets, and though your main thought is of feeding your baby, it's normal to wonder why this is happening. There could be a number of reasons why your baby hates feeding from a bottle, and because no two babies are alike, it could be something else entirely. If you have a newborn, it might take them a bit to get used to a bottle and feeding in general. If your baby is older, and they're not accustomed to bottles, it might be a battle before the stand-off is over.

According to Parents, refusing the bottle is a common problem, and typically not a major issue. But, it can become one if it escalates into an issue of control between you and your baby. The best thing to do, as Parents mentioned, is to continue to offer the bottle at your regular feeding times, and try not to get frustrated or give in by nursing. In fact, a lot of the times, babies specifically refuse bottles from their mothers since they know their preferred method of eating is nearby. Having your partner or other caregiver bottle-feed, while you are not in the room (or house), can often work better.

Timing can play a huge role in bottle refusal as well. As Parenting mentioned, offering a bottle to a hungry baby who typically nurses is just not going to work. Instead, waiting an hour or two after her last feed will allow her to try out and explore the bottle in a much more relaxed manner. Even if she just takes a few sips the first few times, she'll grow more accustomed to the bottle and how it works this way.

Nipple confusion can affect how your baby takes a bottle, too, and it's not for the reason you might think. According to Parenting, over 80 percent of babies can switch from bottle to breast and back without issue. But, if your baby nurses fine and refuses a bottle, the nipple could be to blame. Many times, even a slow flow bottle nipple can be a faster flow than your baby is used to, causing frustration. Other times, the bottle nipple might actually be too slow for your babe. Playing around with nipple flows and bottle choices (different bottle brands can have different flows even at the same level) might help you find one that works for your little one.

You can also offer an alternative to bottles if your baby seems to be staunchly refusing them. According to the website for Dr. Sears, there's plenty of ways to still feed your baby expressed milk or formula, even if they're resisting the bottle. Teaching infants to drink from a cup (with your help, of course) is not unheard of, and the major advantage is that, when the time comes, they'll be ready to drink from an open cup on their own. Spoon-feeding milk, and using an eyedropper or feeding syringe, are two other ways to get your baby what they need.

Remaining consistent, and continuing to offer the bottle throughout the day, is the best way to break your baby out their bottle rut. But if all else fails, remember that there are alternatives when it comes to getting your little one fed.