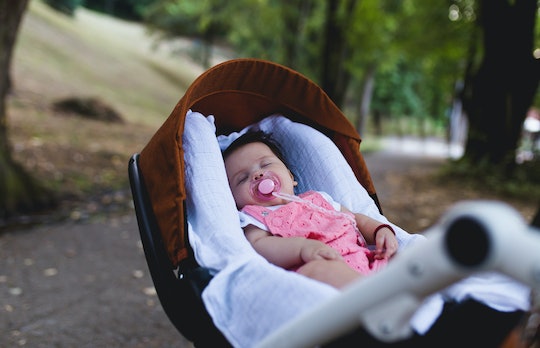 My son was a troubled sleeper. The poor little guy had pretty severe reflux that would wake him frequently during the night, making life challenging to say the least. We eventually learned that naps were absolutely crucial to his well being and helped him sleep better at night. His first nap was always in my arms, but the second nap of the day was usually while he was being pushed in the stroller. It turns out, he wasn't alone. There are solid reasons for why your baby loves sleeping in a stroller beyond mere convenience, but be warned, it's a hard habit to break.

Most modern parents will at some point have their baby fall asleep in the stroller. The soothing sway of the movement combined with the cocoon-like feel of the environment mimic being carried by a parent, which has been positively linked to calmer, happier babies as per a study at the Brain Science Institute. However, it's also been posited that babies who are exposed to fresh, open air sleep better than those babies who are indoors more often than not, according to The International Journal of Circumpolar Health. It's basically the one-two punch of sleeping nap time bliss for your cranky baby.

The thing of it is though, even though many of us rely on these naps just to make it through the day, the American Academy of Pediatrics (AAP) cautions against the practice of letting your baby sleep in the stroller because it puts babies at risk for SIDS. The AAP noted on their website, "If your baby falls asleep in a car seat, stroller, swing, infant carrier, or sling, you should move him or her to a firm sleep surface on his or her back as soon as possible." However, this does not address the popular pram style strollers that are essentially rolling bassinets.

The AAP does consider bassinets a proper sleeping surface, so it's possible that it's a feasible solution for babies like mine. The AAP suggested that you should "Use a firm sleep surface. A crib, bassinet, portable crib, or play yard that meets the safety standards of the Consumer Product Safety Commission (CPSC) is recommended..." The bassinet-style prams that are considered safe to use until your baby can sit up, according to the Mayo Clinic, even come with washable, tight-fitting sheets, as per the recommendation of the AAP.

I spoke with neonatal intensive care room nurse Megan Cleary of Wisconsin to find out why your baby loves sleeping in a stroller. She tells Romper that it's all about the motion. "It feels a lot like the womb for babies to have that gentle rocking motion while being tucked up in a blankie or bundled in bunting. It's soothing with plenty of white noise from the environment and the crunching of the wheels over the pavement." She says that all that sensory input for them is very calming, but deceptive.

"Many babies who sleep in the stroller or the car seat sleep a lot lighter than babies who are sleeping in a stationary crib, and end up crankier and harder to put down at night." There went all of my hopes and dreams in one sentence.

Cleary says that it's really easy to get in the habit because babies fall asleep so quickly in the stroller, but it's best to break them of this habit as soon as possible so that everyone gets the best sleep they can get. So while your baby loves sleeping in a stroller, they just might sleep better in their crib and maybe then you can all get a better night's sleep.

More Like This
Why Babies Love Water, According To Experts
21 Earthy Baby Girl Names For Your Little Force Of Nature
20 Perfectly Proper Tudor Baby Names
The Best Toys For 3-Month-Olds