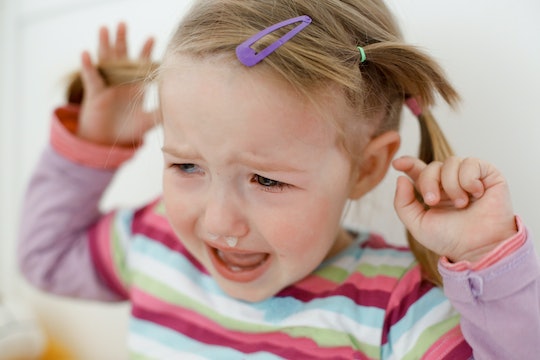 Why Your Toddler Won't Stop Whining, According To Psychologists

I'm a fairly patient parent — the majority of the time. But nothing grates on my nerves and makes that patience run thin quicker than the incessant whining of my kids. For adults, whining seems so unnecessary when a seemingly simple, politely-worded question in a regular voice would suffice. But kids are just not wired that way. If you're anything like me, whining annoys you, too, so knowing exactly why your toddler won't stop whining can help — logical reasoning (along with a few deep breaths and some mental screaming) can make a big difference in easing that annoyance.

According to Dr. John Mayer, clinical psychologist at Doctor on Demand, there's very fundamental developmental explanations for why toddlers whine. "It's one of their primary forms of communication, carried over from their infant years when they didn't have the ability to communicate with words," Mayer tells Romper. Essentially, whining is to toddlers what crying is to babies — a habitual, tried and true form of communication to get their needs met.

Catherine Pearlman, PhD, LCSW, Assistant Professor at Brandman University and founder of The Family Coach, agrees. "Being a toddler is hard work," she tells Romper. "Toddlers have a strong desire for independence and control, but their abilities don’t match their desires, and this is so frustrating for them." When toddlers don’t get what they want, Pearlman continues, they get upset, and their frustration can come out in a tantrum, or with incessant whining.

Whining can also be a form of socialization and emotional expression for toddlers, says Mayer. "It is primitive, yes, but they are just starting to learn better tools, and have not yet developed (or mastered) a better alternative," he adds.

The biggest reason kids whine? It works. "It has worked in the past and it still works for them to get what they want and need," Mayer notes.

Pearlman agrees. "Toddlers tend to continue with these [whining] behaviors because they are highly effective in gaining attention," she adds. A stressed-out or exhausted parent gives in to the whining and offers what the child wants. "The child immediately learns that their whining and tantrums can allow them to receive more of something they want," she notes, "or it helps them avoid something they don’t want."

As it turns out, whining is totally normal (and, annoying) kid behavior. They're still learning how to be people in this world, and as they grow from babies into full-on kids, it's natural to go through a somewhat staggered transition. As parents, you can try your best to not give in to whining, but it's also normal to do so from time to time. Just like your babies are growing, you as a parent are, too. There will always be some bumps along the way. (And more whining.)