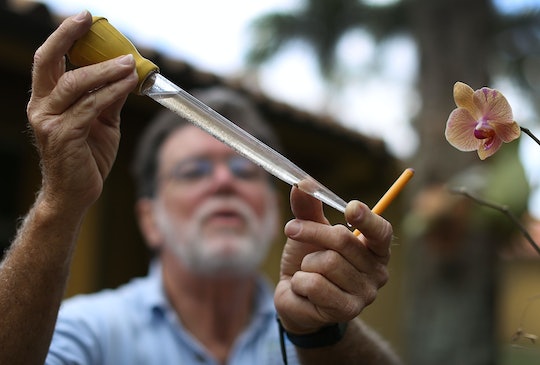 Why Zika Is Scarier Than You Think & Precautions Are Necessary

So far, the Zika virus has seemed like an empty threat for residents of the United States. There have been 350 cases in the U.S., but they've all been linked back to travel to a Zika-affected country. The United States' health organizations asking Congress for funding to fight Zika, though, should give some indication of how serious it could become in the coming months. Here's why Zika is scarier than you think.

First, there are still so many unknowns about the virus' effects and transmission. It has only recently been confirmed by the Centers for Disease Control and Prevention (CDC) that there is a definite link between the Zika virus and the developmental defect microcephaly. But many questions still remain about the danger the virus poses to pregnant or soon-to-be pregnant women. According to CBS News, no one knows how likely it is a baby will be harmed if a mother is infected. One study in French Polynesia reported that 1 percent of babies with infected mothers would have microcephaly. But then another study showed signs of developmental abnormalities in almost 30 percent of women who were infected during pregnancy.

Currently, researchers are saying that mothers and their babies are most vulnerable during the first trimester because that is when organs develop, but babies have also been affected later in pregnancy. That 30 percent rate is incredibly scary, and explains Brazil's — and other infected countries' — panic. Part of the reason there are so many unknowns when it comes to Zika is that it is constantly changing. According to TIME, it has multiple strains of variations and can mutate incredibly quickly, making it difficult to combat.

The main reason the United States has not been more affected thus far is because it is farther from the equator and the tropical climates where the main carriers of Zika thrive: mosquitos. But, winter is decidedly over, and 2016 is already seeing some record-breaking temperature highs. Soon enough, mosquitos will swarm much of the United States, making an outbreak of Zika very possible. All it would take is someone infected with the virus being bitten, and then that mosquito biting someone else. Officials are predicting outbreaks in southern, coastal areas. New Orleans is already taking precautions to control the mosquito population this summer. According to The New York Times, other cities at high risk include Miami, Houston, Biloxi, and Mobile.

But, mosquitos are not the only method of transmission. The CDC has confirmed that the virus can be spread sexually, which broadens the scope of the threat exponentially. CDC officials also said that Zika's ability to be sexually transmitted "might contribute to more illness than was anticipated when the outbreak was first recognized," according to ABC News.

Despite the seriousness of the outbreaks abroad and the impending spread of the virus in the United States, a vaccine or cure for Zika is only in the beginning stages of development. According to The New York Times, experts say it could be years away. So, for now, the CDC is advising mosquito nets and repellents, testing for anyone showing symptoms to help track the disease, and extreme caution on the part of pregnant, or soon-to-be pregnant women.

According to The New York Times, Congress is negotiating across the aisle to approve funding to help fight Zika. President Barak Obama requested $1.8 billion in February, but that request had been blocked for months by Republican congressmen. Now, it looks like that funding, at least in part, will be available more quickly to combat Zika as the temperatures rise in the coming months.