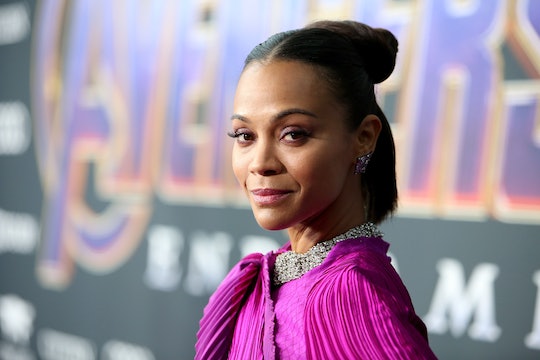 In this day and age, gender roles and stereotypes still exist. But thanks to parents becoming more aware of how these concepts can affect children, more kids are growing up without strict ideas of what boys and girls "should" be doing. They might allow their child to shop in the girls' or boys' clothing sections, make sure to buy both dolls and dinosaurs, etc. Because who's to say a girl can't love Barbie dolls and super heroes? Or that a boy's favorite color can't be pink? Plenty of celebrities have opened up about their philosophies when it comes to the topic of gender and parenting. And the reason why Zoe Saldana keeps her home gender neutral is something all parents should consider.

Now, this isn't to be confused with parents who are truly raising their kids genderless — meaning the sexes of their children aren't widely known, and they use pronouns "they" and "them." (This trend has been referred to as having "theybies," according to NBC News.) Nope. Saldana openly acknowledges that she has three little boys — twins Cy and Bowie, 4, and Zen, 2 — with her husband, Marco Perego, according to Parents. It's simply how she approaches the subject of gender that is neutral.

On Tuesday, April 23, Zaldana opened up her parenting philosophy surrounding gender. “I’m always gonna be honest and that is always the best way to welcome healthy and truthful discourse, especially around parenthood," the actress told Us Weekly. “[The twins] made a comment two weeks ago like, ‘Boys are stronger than girls,’ because they’re in that stage of comparisons. And you have to take a moment and kind of put together an answer that they will understand.” The goal, she explained is:

[To] not bring all this charge that you have as an adult and as a woman into their lives. They’re a blank slate.

It makes sense, right? Baby girls aren't hardwired from birth to love tutus and glitter. And baby boys don't innately shy away from these things. They do, however, respond to how others treat them — as well as to verbal and non-verbal cues about gender roles as they grow. And it all starts at home.

This isn't the first time Saldana has touched upon the subject of gender in relation to parenting. “When you look at parenting, the whole thing about matriarchy and patriarchy, and Daddy’s little girl and Mama’s boys ― my husband and I find that completely ludicrous and absolutely unhealthy for the upbringing of a child,” she told People in June 2018. “You’re giving them a very distorted and limited view on what a female role is supposed to be in a family and what a male role is supposed to be."

Like Saldana, my husband and I make a conscious effort to avoid gender stereotypes in our parenting and in our division of labor around the house. He cooks better (and more often) than I do, for example. And he's actually the one who does the bulk of the laundry. We both work, and we both care for our four kiddos. My son gets his finger nails painted. We have dress-up clothes, dinosaurs, cars, dolls — you name it — and our son and daughters all play with whatever, regardless of gender.

Because gender is a social construct, after all. And no one should be limited based on how they identify, or what genitals they were born with.

More Like This
Reddit Applauds Mom Of Five Who Stood Her Ground & Left Sleeping Dad Behind
Dr. Jill Biden Just Delivered Some Frank, But Powerful, Advice On Motherhood
The Best Back-To-School Sales To Shop Right Now
How To Get Free & Inexpensive Back-To-School Supplies