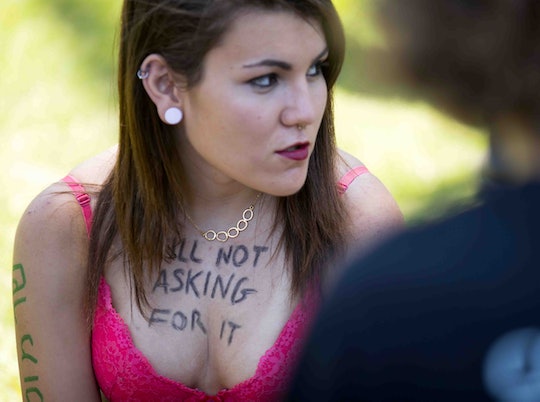 Days after a 2005 video surfaced, which revealed Republican presidential Donald Trump reportedly bragging that he could kiss, grope and make advances on married women — because, as he said, "When you’re a star, they let you do it" — a number of women have come forward with claims that the Republican candidate allegedly sexually assaulted them in a similar manner. Trump has vehemently denied their accusations and his followers, in response, began trending the hashtag #TrumpsNextFakeVictim on Twitter on Thursday. However, the same day that #TrumpsNextFakeVictim began trending, another hashtag was created — and #WhyWomenDontReport shows exactly why sexual assault victims are so afraid to come forward.

The numerous tweets under the #WhyWomenDontReport hashtag highlight the many reasons sexual assault victims may not report these crimes. In one stunningly perfect example soon after, for instance, Fox Business Network anchor Lou Dobbs retweeted an article with the address and phone number of Jessica Leeds, one of the women who recently came forward and accused Trump of groping her more than three decades ago. Dobbs has 795,000 followers on Twitter.

For her part, Leeds told The New York Times that she didn't come forward at the time of her alleged assault because women in business in the 1970s and early 1980s "were taught it was our fault." But as #WhyWomenDontReport proves, more than three decades later, many women still don't feel they can come forward, despite all the supposed strides society has made. (As The Huffington Post pointed out, about two out of every three sexual assaults are never reported to the police.)

In 2016, here are just a handful of the many reasons #WhyWomenDontReport, according to Twitter:

Women began sharing their sexual assault experiences on Twitter with the hashtag after Vox senior correspondent Liz Plank asked her followers why they didn’t report their assault:

Shortly after Plank sent out her tweet, women around the world began sharing their reasons why they decided they couldn’t or did not want to come forward after they had been assaulted or harassed. Some women said they feared they would not be believed, others said the process after speaking up would be far more difficult to deal with, and some felt that there was no point and that this kind of behavior has become normalized for women in general.

When you consider the striking barriers that women on Twitter cited for not coming forward, these alarming statistics start to become very clear.

So while the internet continues to scrutinize the credibility behind the stories of Donald Trump's sexual assault accusers, other women around the world may feel even more discouraged about coming forward. This is a cycle that desperately needs to be broken, if only for the sexual assault victims who need support — not shame.