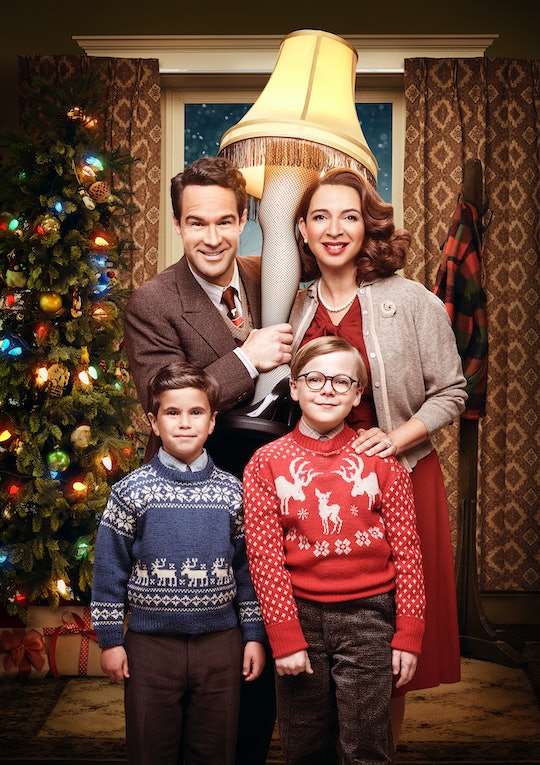 Will FOX's 'A Christmas Story Live!' Be On Netflix?

Fans of the classic Christmas film A Christmas Story are probably counting down until the live version finally airs on FOX. For those (unlike me) who have actual plans, though, catching a live event is no easy feat, which is why you may be curious to know: Will A Christmas Story Live! be on Netflix? For those who don't regularly watch network television, it may be the best way to watch the event after it airs. Viewers won't get the benefit of knowing they're seeing comedic legends like Maya Rudolph and Jane Krakowski act in real time, but nonetheless they can relive the retelling of the 1983 Christmastime staple.

A Christmas Story Live! is just the next installment of the recent resurgence of live television events — live musicals, in fact. In the past few years, NBC has adapted Peter Pan, The Sound of Music, Hairspray, and The Wiz to be live productions. FOX's first live musical was Grease, and it produced The Rocky Horror Picture Show as well. Last year, FOX aired The Passion, which was a modern retelling of Jesus' crucification that takes place in New Orleans; it was also a musical. ABC has forayed with the live musical drama with Dirty Dancing. They had another in the works — The Little Mermaid — but it's since been postponed.

Seeing as FOX isn't a stranger to live productions, it makes sense that they'll bring A Christmas Story back with a Broadway twist. According to The New York Times, Benj Pasek and Justin Paul (the duo behind musicals like Dear Evan Hansen and La La Land) penned new songs for the show based on the 2012 Broadway production. Some members of the cast, like Rudolph and Krakowski, are used to live performances. Rudolph was a main cast member of Saturday Night Live for years, and Krakowski has starred in Tony award-winning musicals. Another heavy-hitter, Matthew Broderick, will be the narrator of the production; he, too, is a Broadway veteran.

Seeing as A Christmas Story isn't FOX's first musical, it may run the course that its previous ones did. For those who are curious whether it will be available for streaming after it airs on Sunday, I took a look at what happened with Grease Live. The production aired in January of 2016, and Grease Live was made available in April of that year. Unfortunately, it's no longer available on the platform; it was removed April 1, 2017 (so it was available for exactly a year). If A Christmas Story follows the same pattern, it could be on Netflix in the next few months.

The Passion, FOX's only other musical production thus far, was also distributed by Netflix after its airing. The Passion aired March 20 of last year and became available through Netflix on March 22. It's not on the platform anymore either, but if it had a 12 month deal like with Grease that makes sense. Hopefully, like with Grease, A Christmas Story will follow suit and not only become available on Netflix in early 2018, but it will stay through Christmas of 2018. Also, it's likely that FOX will re-air the production several times in the weeks following the live showing.

If fans missed it the first time (or just want to rewatch it to get more in the Christmas spirit), there will probably be several opportunities to do so. While The Passion wasn't universally beloved, Grease Live was well-reviewed (with 91 percent on Rotten Tomatoes), so I'm hopeful FOX will produce another highly regarded musical. Judging by the talent attached, it's sure to be one to watch — and rewatch, on Netflix or otherwise.