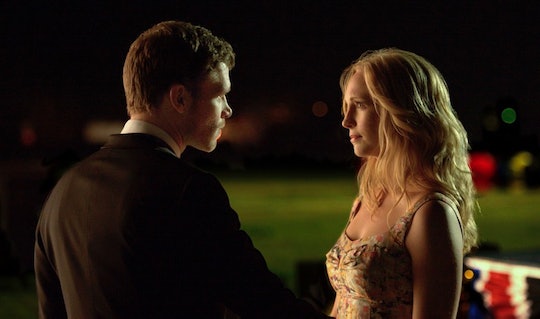 A Klaroline Spin-Off Is Totally Possible

It's officially been a week since The Vampire Diaries series finale debuted and brought the Mystic Falls characters to an epic conclusion. However, this may not be the end of the road for one particular resident. Caroline Forbes was the only remaining vampire left in the bunch, which means her story could continue on at pretty much any point in time. Not only that, but the series also left the door open for a Klaus and Caroline reunion in the future. So will a Klaroline spinoff happen? The Originals isn't the only way this former TVD duo could come face-to-face again.

During a recent interview with Variety, executive producer Julie Plec made mention of how she'd be more than willing to bring more TVD characters like Caroline over to the New Orleans fold. "I think probably everybody involved with The Vampire Diaries needs a nice, long break from being a vampire or witch, werewolf, etc," she stated. "And if, when they come out the other side of that hiatus, they want to show up in The Originals sandbox, they are all absolutely welcome with open arms." But that isn't the only option she's willing to consider in the grand scheme of things.

When the subject was broached during a different interview with Entertainment Weekly, Plec made it clear that all of her plans for Caroline are up in the air for the time being, but she's hopeful for the future.

I can’t make any promises for many reasons: One, because we don’t have a fifth season of The Originals. Two, because while I love the world of the boarding school and all that it represents, that would be an entirely new show that I haven’t even begun to think about, but the doors were not left open unintentionally. They’re open with a hope, not a promise.

So the way I see it is, anything is possible at this point in time. Now that we know Caroline immerses herself in creating a boarding school for the supernaturally gifted, the spinoff could go in that direction with Klaus doing everything he can to help ensure the project's success. Or she could do so well that she ends up setting up additional schools of its kind all over the world — including New Orleans where she could very easily take up residence herself. (Don't get me wrong, I miss Stefan, but Caroline is single now. Bring on the Klaroline romance already!)

From the start, I have always loved the idea of Caroline and Klaus as a couple. They challenge each other in exciting ways and their chemistry practically radiates off the TV screen. I would love to explore how an actual relationship would play out between these two. The success of The Originals forced this potential 'ship to go on the back burner. So I'd love nothing more than to give this potential romance the spotlight it so deserves. All we can do in the meantime, though, is just wait and see.