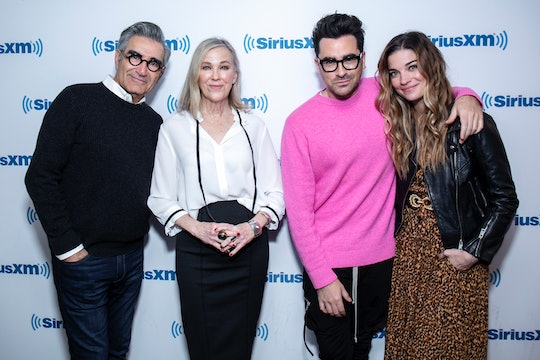 A 'Schitt's Creek' Movie Could Happen, But Only With A "Really Freaking Good" Idea

After making history at the 72nd Primetime Emmy Awards, fans who can't get enough of the Rose family may be bummed to know that a Schitt's Creek movie is not currently in the works, though the idea isn't totally off the table. However, it sounds like the creative masterminds behind the incredibly popular Canadian series are content with how it wrapped up its final season.

Schitt's Creek, which aired its series finale earlier this year, took home seven awards in the comedy category at the 2020 Emmys, making it the first comedy to win all four best acting categories, according to Vanity Fair. After the awards show on Sunday night, the show's creator and co-star Dan Levy told reporters that, at least for now, he's done telling the Rose family's story. "To be honest, this is the best way that we could have ended the show," Levy said, according to Variety.

However, Levy did add that if a brilliant idea for a movie comes to mind, they may explore it. "If there is an idea that pops into my head, it has to be really freaking good because this is a nice way to say goodbye," Levy told reporters. "Fingers crossed we get a nice idea popping into our head soon... I would love to work with these people again."

Levy echoed these thoughts about more Schitt's Creek while speaking with The Hollywood Reporter in April. "I think the audience needs to take a breath in order to really want to see these characters again, and more importantly, I need to take a breath, do some other things in order to hopefully get an idea that is special enough to bring everyone back together," he told the news outlet.

Schitt's Creek ended earlier this year after a six season run. The show about a wealthy family that loses their fortune and moves into a motel located in the small town of Schitt's Creek has been a hit with viewers for its uplifting messages and feel good, hilarious story lines. Ultimately, while fans were sad to say goodbye, the series' final episode gave the Rose family the happy endings the characters deserved.

Hopefully a "really freaking good" idea comes to light and brings back the hilarious Rose family once again. In the meantime, you can keep on streaming the first five seasons of Schitt's Creek on Netflix right now, with the final season available on Oct. 7.