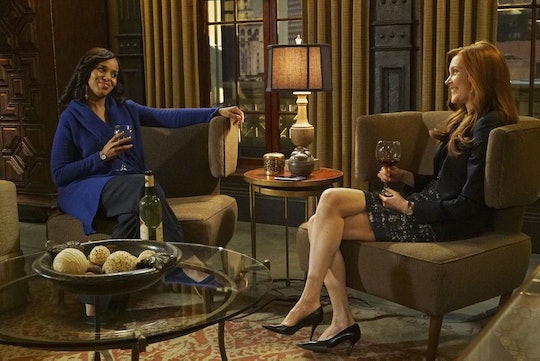 On the winter finale of Scandal amidst Mellie's filibustering for Planned Parenthood, Olivia underwent an abortion. She had just moved out of the White House and broken up with Fitz — and she did not tell anyone, not even Fitz, about it. Of course, despite not telling anyone, her father somehow found out — and told Abby. She could easily use this to blackmail Olivia. But will Abby reveal that Olivia had an abortion on Scandal?

As usual, Rowan Pope was the worst and continues to attempt in every way to bring Olivia down. This time, he took to telling Abby that she had an abortion the night she moved out of the White House. As Olivia and Abby are on different candidates' presidential campaigns – Olivia for Mellie, and Abby for Susan – Abby could use this to damage Mellie's Republican campaign.

Being Olivia, however, she also had dirt of her own: on Susan and David. Olivia and Abby decided to meet and discuss whose blackmail was worse to move the campaign forward. While Olivia said what she knew about Susan, Abby chose not to reveal Olivia's abortion.

Later, Olivia urged Abby to tell her what dirt she had on Mellie — but she realized it was not about Mellie, but herself. Will Abby eventually reveal what she knows? From their discussion, it looks unlikely. Olivia told Abby she is not ashamed of her abortion, and she does not care who knows. The reveal would not hurt her, but hurt Fitz both publicly and privately because he does not know.

For now, it seems that Abby will keep this secret for two reasons: she wants to protect Olivia (and give her her privacy), and because she wants to protect Fitz. Despite their rocky relationship lately, it's clear that Abby cares about Olivia and does not want to bring her down. On the other hand, she has already burned Olivia — but would not burn Fitz. Abby does not want to be the one to tell Fitz this sensitive event.

Abby keeping quiet about Olivia's abortion does not mean people won't find out about it. Rowan somehow found out, so who knows who else he will tell. Now that multiple people know about it, it's all the more possible that they will slip. And this is Scandal, so anything dramatic that may happen can and will happen. With the season finale next week, Fitz and others finding out about Olivia's abortion may come sooner than we think.