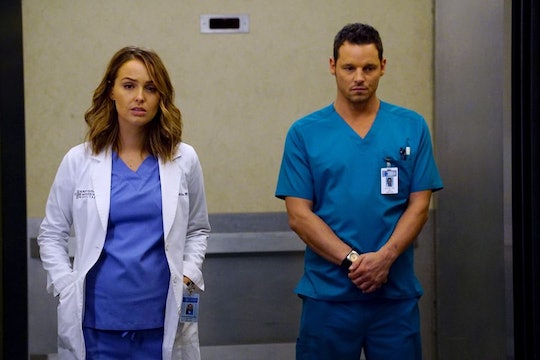 Alex Needs To Get His 'Grey's Scrubs Back ASAP

The majority of Season 13 of Grey's Anatomy has been focused on Alex's trial for beating up DeLuca, and it looks like that storyline is finally coming to a close. After being led to believe Alex had accepted the district attorney's plea deal to go to jail for a few years, fans were relieved to see him at home sleeping. Although it hasn't been confirmed yet, fans are under the impression that DeLuca dropped the charges and Alex is now free as a bird. So will Alex Karev return to work on Grey's Anatomy? The preview for the next episode has left fans with some doubts.

If DeLuca really did drop the charges against Alex, it would stand to reason that he'd get his job back as a pediatric surgeon. However, Dr. Bailey is a tough boss and while Alex may no longer be in trouble with the law, he may still be in trouble with her. Still, I can't see her punishing Alex forever and Arizona does need another peds surgeon helping her. Even if Bailey is hesitant to just let Alex scrub back into surgeries, between Arizona and Meredith, I'm sure Bailey can be convinced to let Alex get back to work again.

The only real issue that may stand in Alex's way, is the ongoing strike against the new Residency Director, Eliza. In the preview for the next episode, it looks like the fight rages on with Meredith refusing to work with Eliza and Bailey ultimately sending Meredith home. I hate seeing two of my favorites fight; a hospital divided cannot stand. With Bailey having to deal with this outright protest, she may not even have time to think about reinstating Alex. Moreover, if she's angry at Meredith for defying her orders, she definitely won't be willing to do her any favors by giving Alex his job back.

It probably also won't help Alex's case that Catherine Avery will be back in the next episode. She's the one who really started this whole mess with the new residency director and she's also the one that told Bailey to get rid of Alex after the DeLuca incident occurred. So I have a sneaking suspicion she won't take too kindly to the idea of welcoming him back with open arms, whether the charges have been dropped against him or not.

This Thursday's episode of Grey's is bound to be filled with drama and one you won't want to miss. Make sure to tune in to ABC at 8 p.m. ET to find out Alex's fate.