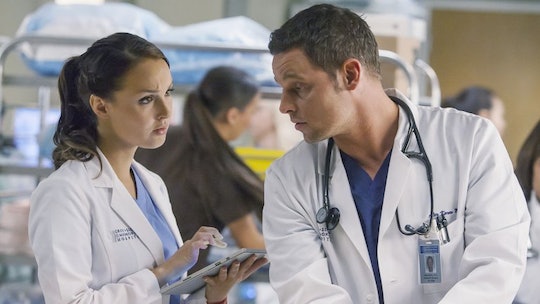 Will Alex Kill DeLuca On 'Grey's Anatomy'? A Misunderstanding Took A Violent Turn

On the May 19 episode of Grey's Anatomy, Jo revealed to DeLuca the true reason why she won't marry Alex. It turns out Jo has a secret abusive husband who she ran away from and has been hiding from ever since. Jo doesn't want to tell Alex about her husband because she knows Alex will try to help, putting himself in danger, too. Right after Jo confesses the truth she takes off her shirt and begins to fall into bed, drunk. DeLuca attempts to help her but falls on top of her in a very compromising position. Alex, of course, walks in and catches them, leading him to start attacking DeLuca in such a rage, it almost seems like Alex could kill DeLuca on Grey's Anatomy.

When Alex walks in, he takes one look at the situation going on starts knocking him out while Jo screams, "Alex!" in the background. It doesn't seem like Alex has any plan of stopping, but we won't know for sure what happens next until next season.

Could Alex really go so far as to kill DeLuca? Probably not. As Alex said at the beginning of the episode, he's not a boy anymore, he's a man. It makes sense that he was angry and a bit irrational when he first walked in and saw DeLuca on top of Jo, but once common sense kicks in Alex will force himself to stop. And if he doesn't, Jo will step in. She may have been drunk, but seeing Alex pummel DeLuca to a pulp probably sobered her up a bit. Jo can handle her own, as we saw when she beat up her ex-boyfriend, Jason, after he hit her way back when, so getting Alex to back off DeLuca shouldn't be too much trouble for Jo.

Also, once Jo explains what was really going on, Alex will definitely calm down and probably apologize to DeLuca for his rash behavior. Or is this all just wishful thinking? Alex has a lot on his mind, could he really kill someone unintentionally for a confusing situation? Also, will Jo really tell Alex the truth about her husband after keeping this secret from him for so long? She definitely won't want to but it may be the only way to get Alex to calm down and Jo won't just let Alex beat DeLuca to death. Jo will have to step up and intervene even if it's the last thing she wants to do. Besides, Alex can't go to jail. Hasn't he been through enough?