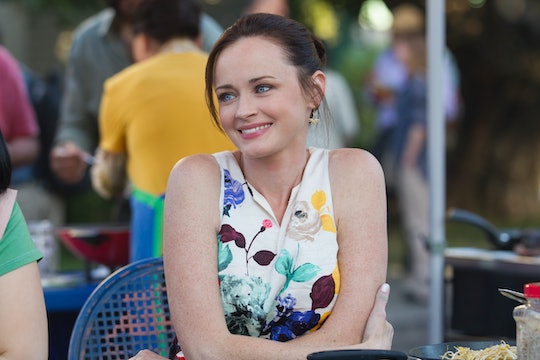 Will Alexis Bledel Return For Season 2 Of The 'Gilmore Girls' Revival? She's On The Fence

Now that the Gilmore Girls revival is out in the world and fans know the final four words, many are desperately asking for a Season 2. Although there's been no confirmation about a second season, many fans are hoping there will be because those last four words left the show on a bit of a cliffhanger and gave us a lot of questions to ponder. If there is a second season, many viewers wonder if everyone will return. In particular, will Alexis Bledel return for Season 2 of the Gilmore Girls revival? Those last four words revealed that Rory was pregnant, so it seems almost necessary for Bledel to be in the second season, if there is one.

Throughout the four-episode revival, fans watched as Rory and Logan cheated on their significant others with each other. However, in "Fall," after one last hook-up, Rory ended their relationship for good and headed back to Stars Hollow. At the end of the episode, Rory told her mom she was pregnant, which seems to indicate that Logan is the father of her baby. Many fans were dissatisfied with this ending because it lacks closure. Based on the conversation Rory had with her father prior to the reveal that she was pregnant, it seems like Rory plans on raising her baby on her own, much like Lorelai did. However, does that mean Rory's just not going to tell Logan she's pregnant? Or will she tell him, but also tell him she doesn't need his help and can raise the baby on her own?

Then there's also the question of Jess and Rory. At the end of "Fall" Luke asked Jess if he was over her and Jess said yes. But then, when Luke walked away viewers saw Jess staring longingly at Rory through the window. It looks like Jess still has feelings for her and many fans believe Jess is the Luke to Rory's Lorelai and Logan is like Christopher. At the premiere of the revival, Entertainment Tonight asked Bledel if she would be interested in continuing Rory's story, but she said she wasn't sure. "It all depends on the story," Bledel said, adding:

I feel so grateful to get to do [Gilmore Girls: A Year in the Life] that I'm not even looking forward necessarily at the prospect of doing more. I also feel like it's such a special story that I don't want to exploit it, or do too much, you know?

Although Bledel didn't say no to the idea, she also didn't exactly say yes either. For now we'll just have to wait and see if a Season 2 is on the horizon or if this is really goodbye to the Gilmore Girls for good.