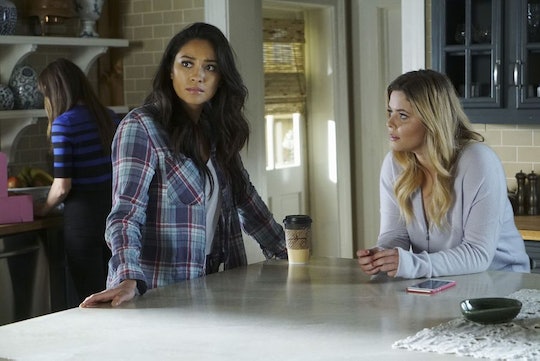 Will Ali Keep The Baby On 'Pretty Little Liars'? She May Not Want It

On Tuesday night the Season 7A finale of Pretty Little Liars aired and we were hit with a lot of bombshells. From deaths, shootings, car accidents, secret kids, and a baby on the way, everything about this episode was shocking. One of the biggest reveals was when Ali confessed to Emily that she's pregnant with Archer's baby. The big question now is will Ali keep the baby on Pretty Little Liars or will she decide mixing the DiLaurentis and Dunhill bloodlines is probably a bad idea?

It's obvious Ali is already struggling to decide what to do about this pregnancy. The fact that the only person she's told about it so far is Emily makes it clear that Ali has no idea what she's going to do. It's unclear how far along she is but seeing as how Archer died pretty early in the season and Ali was locked up right before he died one has to assume she's at least a month along. Unfortunately for Ali she'll have to make a decision sooner rather than later when it comes to this baby but this isn't a easy decision to make.

Ali admits that this is not at all the way she planned to start her family and she's devastated that this is happening right now. After everything Archer put her through it's understandable that she'd much rather just forget all about him than have his child. Still, this child is a part of Ali and although Ali hasn't said much about what she wants for herself future wise, it seems she does want to have a family someday. Even though these aren't the perfect circumstances it wouldn't be surprising if Ali decided that she still really wants to have this baby, even if she does have to raise it her own.

However, she may not have to do this all by herself. She'll definitely have help from Emily and the other Liars once she tells them and though there's a lot variables Ali will have to consider it seems most likely that she'll keep the baby, especially now that she and Emily are kind of together again. Emily would do just about anything for Ali, including raise her baby with her, and that reassurance might be the only thing Ali needs to see this pregnancy through.