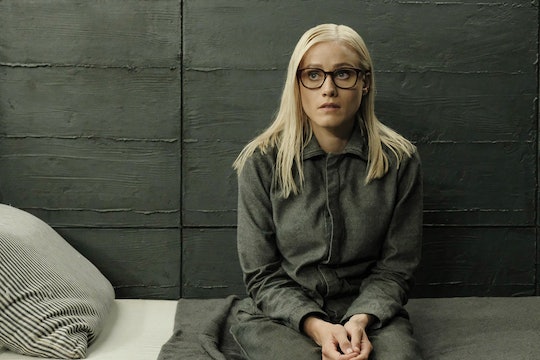 Alice Won't Be Stuck In The Library Forever On 'The Magicians'

Alice was in a precarious position at the end of The Magicians Season 3. She broke a deal with the Library that left her locked in a cell, plus she was the only person who knew what the Monster was capable of and how much danger her friends were in. She might be the only one who can save them, but will Alice escape the Library on The Magicians? If she can't, the other characters could be doomed.

At the end of "Will You Play With Me?" Alice begged Dean Fogg to find a way to release her from her prison so that she could prevent the Monster from messing with her friends. She knew the creature was capable of jumping from body to body and no one could defend themselves against it without magic. But the lead Librarian was staying firm on keeping Alice in jail. She was supposed to work with the Library but broke her promise, which meant that they could do as they liked with her.

However, it's hard to imagine that Alice is going to stay stuck behind bars for the entirety of Season 4. When the show returns with new episodes on Syfy on Jan. 23, Alice will have a plan in place. As actress Olivia Taylor Dudley told Tell-Tale TV, "From the get-go, [Alice is] trying to figure out how to get out of jail and how to save her friends."

And Alice might succeed, because the Season 4 trailer does show her in some new locales. Viewers can catch a brief glimpse of her standing over what looks like a fountain in the Neitherlands, doing magic. She pops up in the library, lurking among the stacks. Someone tells Alice that she has the power to become a master magician, and later she suggests sparking a rebellion.

Though Alice appears to spend some time in the Library jail in her sad gray jumpsuit, it doesn't look like she'll be there for long. It's unclear whether she gets out on her own or has help, but Alice is in too many non-Library scenes to be their prisoner forever. Perhaps she strikes a deal to gain temporary freedom. Maybe she stages a jailbreak. Alice is a skilled magician with Niffin knowledge, so if anyone could get out of magical prison, she could.

Alice doesn't know everyone else has been glamoured to forget their real identities — at least not at first. She isn't getting any news from her cell. Her only visitor is Dean Fogg, but even though he makes the time to see her, Dudley told Collider that didn't "necessarily mean [their] relationship is good."

Alice will need to learn what's going on before she can take any concrete steps to get out of her current situation. She probably won't escape from the Library immediately; it may take her a few episodes, or even longer. But she's eager to find a way out so she can fix things. And what Alice sets her mind to, she usually accomplishes.