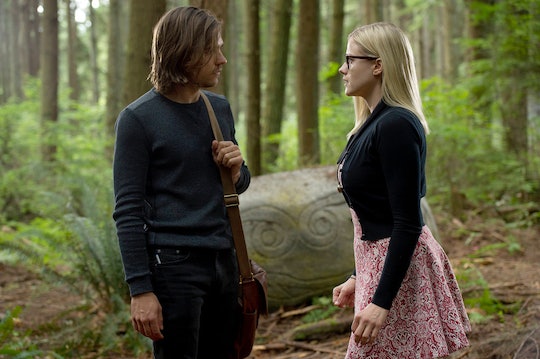 What's Next For Alice On 'The Magicians'?

By now, many of you are probably freaking out over the possibility that Alice is dead on The Magicians. Because she certainly looked dead by the end of Episode 3 after purposefully becoming a Niffin in order to defeat the Beast for good. This forced Quentin to release his cacodemon to stop her from hurting the rest of them, which presumably seemed to kill her. But could Alice still return on The Magicians or has the character left our screens for good? Fortunately, Romper was able to interview Olivia Taylor Dudley (who plays Alice) and Jason Ralph (who plays Quentin), prior to the episode's release to discuss Alice's future on the show moving forward. And while Dudley couldn't go into any specifics, the actress was able to inspire some hope regarding her character's seemingly grim fate.

"No, of course it's not the last they're going to see of Alice," Dudley teases. "I don't really want to reveal in what [capacity]." So this could either mean that Alice isn't as dead as she appears or there will be some kind of twist involved in how she bounces back from this seemingly fatal altercation with the Beast. Or maybe from now on we'll only see her in flashback form, which is what many other shows have done in the past. Either way, it's at least reassuring to know that this character won't be completely off of our screens for good.

Whatever the case may be, Dudley is thrilled about where her character arc is going and so thankful for being part of something so magical. "I'm really lucky on this show, Dudley states, while adding:

John [McNamara] and Sera [Gamble], our showrunners, take really good care of us and they see how much we love these characters, so they weren't just going to let Alice go. But if they did, it'd still be worth it to me. All the work I did with Alice, with Quentin, I think is worth it even if we never saw her again.

Thankfully, that won't necessarily be the case. However, regardless of how Alice will fit into the show from here on out, you better believe Quentin will feel the repercussions of what happened. "The love of his life dies and they both hurt each other and they really never got to say I'm sorry, so it's just unresolved," Ralph reveals. "And then, as the season progresses, the lack of resolve there gets in the way of his mourning and prolongs his mourning in a way that is detrimental." So that sounds ominous and terrifying.

We'll have to wait and see in the next few episodes what ends up happening with Alice's story, but it feels like she won't be gone from our lives completely. Whenever magic is involved, the sky is the limit.