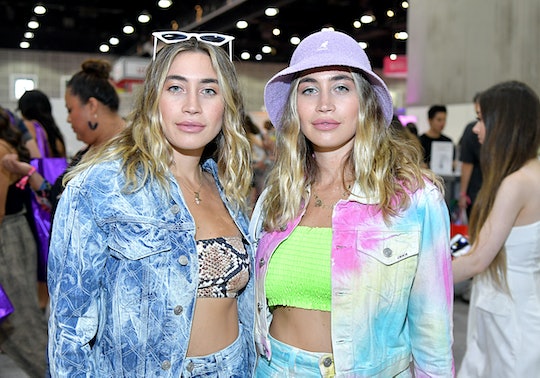 The love triangles continue on MTV’s Ex on the Beach, and each week, the relationship drama gets more intense. Twins Lexi and Allie Kaplan have been seeing their fare share of tension in the house, and one of them may be close to leaving. Lexi still has a good chance of staying on, but things don’t look great for her sister. So, will Allie get voted off Ex on the Beach?

It’s hard to predict, but things haven’t been going her way. On the Sept. 12 episode, Allie was called out to the beach after showing up on the Tower of Terror alongside Billy and Anthony B., and she seemed a bit nervous by the idea of one of her exes showing up. “This is the first time I’m out of the house without Lexi,” she says as she waits on the beach to see who’s ex washes up. “You go to the beach, you never know one way or the other who’s gonna show up — I’m freaking out, in my mind I’m thinking like ‘Who did they dig up, what skeletons are popping out of my closet right now?’”

However, it turned out to be Billy’s ex, Emily that showed up. So far, Allie hasn’t been in any major romantic entanglements in the house, and if she doesn’t end up with someone, she does face the chance of elimination. If one of her exes pops in the next episode, it’s possible she’ll find a good reason to stay.

Lexi on the other hand, has been in two relationships since entering the house. Initially, she found a spark with Billy, but after a while, things began to fizzle out. Currently, she seems pretty happy with Max, who she’s been cozying up to more and more in the last few weeks.

If Allie does get voted off, there’s no doubt it will be hard for Lexi. In an interview with the podcast, Kinda Dating, the twins talked about how they roll as a package deal, even when it comes to dating. "When you date one of us, you're dating both of us,” they said. "It's the dream of so many, and the nightmare for the few who know.” They explained that anyone they date "has to really understand and acknowledge that maybe they'll be number two sometimes,” and that if one of them “is single and the other one's in a relationship, that's when it's like the worst."

There aren’t any clues on the twins Instagram page, so it’s hard to tell whether or not Allie is dating anyone from the Malibu house. Aside from posting promos from the show and promoting their art, the sisters haven’t revealed anything about their personal relationships. On their Youtube channel, Allie and Lexi recently shared videos doing fun things together like shopping, painting, and getting into a tomato sauce fight, but they haven’t mentioned any details about their time on the show.

It’s unclear if Allie will be voted off, so fans will have to continue watching through the season to see how things unfold.