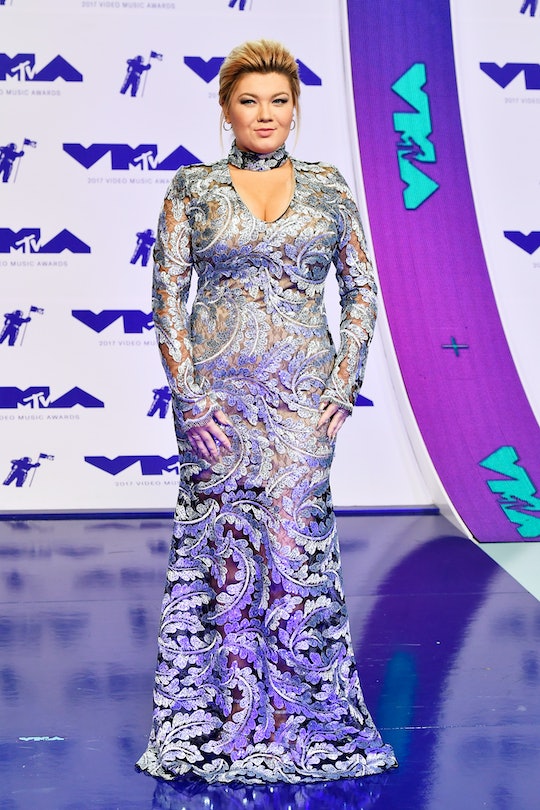 The Teen Mom OG Season 8 finale airs on MTV on Aug. 19. In "The Weight of the World," confrontations are had and bad news weathered as the cast closes out another year with the show. The end of one season naturally leads to questions about the next one, especially since long-time series star Amber Portwood's future with the show feels uncertain. Fans might be wondering if Amber will be back for Teen Mom OG Season 9, considering everything she's been dealing with offscreen.

It doesn't look like the network has released an official statement about Amber taking part in the next season. She hasn't made any announcements about whether or not she'll be sticking with the show, either; social media didn't have any clues about Amber's continued presence on Teen Mom OG. Representatives for Amber did not immediately respond to Romper's request for comment. Right now, it all seems to be up in the air.

But Amber will appear in the finale if the trailer is anything to go by. It even looks like the episode will bring up Amber's recent arrest. In July 2019, Amber was arrested on suspicion of domestic battery, according to Deadline. People reported that she allegedly threatened her partner, Andrew Glennon, with a machete while he was holding their one-year-old son James. The very end of the trailer briefly references what happened. You can watch for yourself below.

After catching up with all of the other cast members, the trailer closes out with Amber admitting that she's been "irritated over the smallest things" lately. Then it cuts to a picture of her mugshot. There are no additional details, but it seems like the show intends to address what happened. That could be a sign that Amber will still take part in Teen Mom OG and that the series will explore what she's currently going through. That's just speculation, however; there's no way to know for sure without an official statement.

The most direct comment Amber appears to have made about her arrest was an Aug. 3 Instagram post. She shared a Keanu Reeves quote along with the caption, "Remember who I am not what you hear [sic]. Your negativity can't phase me anymore. I've learned this last month how ignorant people can really be. I'm going to be just fine in any aspect of my life!" She sent love to "intelligent beautiful souls" but didn't speak to Season 9 of Teen Mom OG, or her part in it.

In 2010, Amber was charged with felony domestic battery and child neglect after MTV cameras caught her assaulting her ex, Gary Shirley, in front of their daughter, Leah, per CBS News. Since she still appeared on Teen Mom after that incident, it seems possible that she will stay on the show after this latest incident as well. But without MTV or Amber herself weighing in, it's impossible to tell whether you can expect to see her in Season 9 or not. It might be too early to make that call, too. Amber's place in the Teen Mom OG cast could be dependent on how this situation resolves in the coming months.