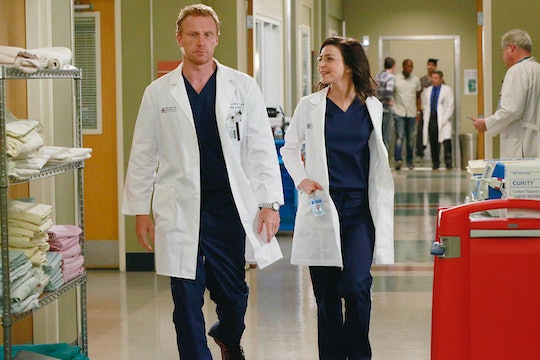 Amelia & Owen May Be Dunzo On 'Grey's

At Grey Sloan Memorial Hospital everyone's either hooking up, dating, getting married, or getting divorced. However, when it comes to Owen and Amelia, it's hard to know where they currently stand. The two haven't been seen onscreen together since Amelia pulled a disappearing act on Owen after she told him she doesn't want a baby. Since then, she's been hiding out at Stephanie's place, however it appears she's finally ready to face her problems on Thursday's new episode. So will Amelia and Owen get divorced on Grey's Anatomy or can they make their marriage work?

Amelia and Owen got married during the finale of Season 12 and since then it's been a rocky road for the two doctors. Though Amelia seemed like she wanted to start a family with Owen, after she had a pregnancy scare and the test came back negative, she realized she wasn't ready after all. As she told Alex (and if you watched Private Practice you already knew), Amelia was pregnant before but the baby was anencephalic, meaning he had no brain. She decided to donate the baby's organs, but the death of her child continued to weigh on her and she partially felt responsible because of her drug addiction.

Though Amelia has mentioned that she's lost a baby to him before (once when April and Jackson's baby died, and then after Derek's death), she's never really told Owen about that experience or how it affected her. Now, rather than tell Owen the truth about all this, she shut him out until she finally exploded and told him that she didn't want to have kids. Still, she didn't explain why and instead left, leaving only a note behind. She hasn't seen Owen since, even though he went to Stephanie's house, knowing she was there.

The only way these two can make this marriage work is if Amelia finally opens up about her past. It's understandable that she doesn't want to talk about it because it hurts her so much, but Owen is her husband and if she can't be honest with him and trust him then they shouldn't be together. Owen is obviously giving his all and trying to be there for Amelia, and while having kids was a deal breaker for him and Cristina in the end, it's not the same situation between him and Amelia.

Owen will understand why Amelia doesn't want to have kids and he'll most likely respect it. Owen is reasonable and, yes he wants kids, but in this instance I believe he probably wants Amelia more. At the very least, Amelia owes Owen the chance to decide for himself. She's assuming he doesn't want to be with her now that she doesn't want a family, but she doesn't actually know that and won't know until she lays it all out on the table for him.

Hopefully Amelia opens up and lets Owen all the way in, otherwise this marriage may be doomed for good.