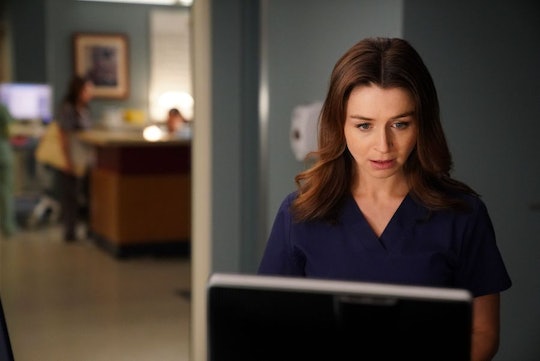 Grey's Anatomy kicked off Season 14 with a two-hour season premiere and one very big bombshell: Dr. Amelia Shepherd has a brain tumor. In a show that has been running so long that it once featured emergency deer surgery and interns practicing unsupervised appendectomies on each other, this is actually a pretty plausible storyline. It complicates Amelia's character because, while we've been assuming her erratic behavior is a result of her addiction and PTSD, it's now possible that her neurological functioning has been physically impaired. So will Amelia tell Owen about her brain tumor on Grey's Anatomy? Unfortunately, disclosure is not Dr. Shepherd's strong suit.

It took her until after she was married to finally tell Owen that her boyfriend died of an overdose before she was in recovery and that she was carrying his baby at the time. The baby turned out to have anencephaly, but she carried him to term and he died the day he was born. This all came out by way of Amelia explaining why she felt anxious about having kids with Owen, so she's not the best at sharing big scary life updates with her loved ones. But in an interview with Entertainment Weekly, Kevin McKidd, who directed the second hour of the season premiere in which all this played out, revealed that Owen does learn his wife's diagnosis eventually.

He doesn’t know that the tumor exists. It doesn’t take too long for him to find out, and he steps up as a husband should. Even if Amelia said certain things to him, and even if he’s obviously very conflicted and very much looking at the possibility that this marriage might not work, and they’re on different pages, he definitely steps up in the role as he should do.

Of course, he points out, Amelia and Owen are already on the rocks, which further complicates matters. Amelia both has a lot of feelings she wants to talk about and tends to shut down and run away when she thinks someone doesn't understand her. This leads to a lot of icy moments with Owen and not a ton of communication. He's super patient with her but with his whole family at the hospital in crisis, Amelia's absence has become noticeable. Owen's sister Megan, Teddy, and his mom all staged an intervention in which they pointed out that Owen's marriage looks like a sham from the outside.

He tried to defend Amelia, but with "his person" Teddy in town, he allowed himself to realize that his relationship isn't working. Owen also tried to reason with Amelia, suggesting therapy or medication or some other intervention to deal with her trauma, but she coolly shut him down and politely told him to go be with Teddy, if that's what he wants. It's a bizarrely detached response, but now that we know she has a brain tumor, it makes a little more sense.

"It’s a tough one for Owen because he’s left with dealing with this person who, going forward, if they manage to remove the tumor, could potentially have a very different personality to the one that he married," McKidd pointed out in the same interview. "She has a lot of questions about, ‘Who actually will I be when this thing is taken away from me?’ So it’s going to impact everything."

As for whether Amelia's illness will impact their MFEO status, McKidd said that it could either be the thing that brings them together or the thing that makes them realize they shouldn't married in the first place. Either way, it's clear that this storyline is going to be a huge focus for at least the first part of Season 14.