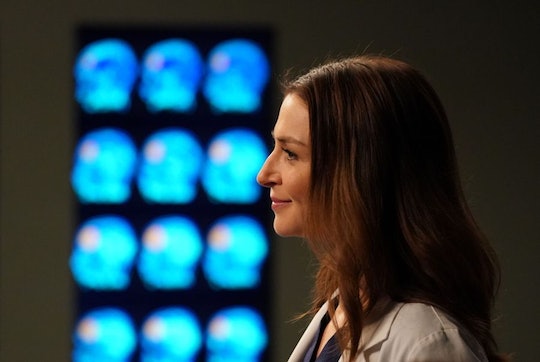 Amelia's Journey To Recovery Has Begun On 'Grey's Anatomy'

Last week, it was revealed that Dr. Amelia Shepherd, extraordinary brain surgeon, had a brain tumor. This week, fans were comforted to learn that it was benign but brain surgery is still a big, and scary, deal. So will Amelia's brain tumor get removed on Grey's Anatomy? That seems to be the plan.

Going into this week's episode, it seemed like Amelia wasn't going to tell anyone she had this brain tumor, and at first, she wasn't. When the episode began, DeLuca revealed it's been a week since she got the diagnosis and all Amelia's been doing is making plans for what to do next instead of telling her friends and family what was going on with her. She also called in her former teacher, the "best" brain surgeon. He'll most likely be the one to remove her tumor, but like most of us, he was also distraught that Amelia hadn't told anyone about her condition. In particular, he made it clear she shouldn't be working until it was removed.

Apparently, the tumor, which is located on Amelia's frontal lobe, could affect her decision-making and this could've been going on for years. As a doctor who constantly works on people's brains, this was probably the worst thing to hear. Amelia often holds people's lives in her hands and to then be told that everything's she's done could've been impacted by a tumor she didn't know about is terrifying.

This led to Amelia pulling all her files from the hospital and anxiously looking over her past surgeries, trying to find fault in them. She recalled how her surgery on Dr. Herman led to her going blind, even though that surgery also saved her life. Then there were all the patients that died during surgery, and Amelia worried those were all her fault too. Thankfully, Dr. Webber was there to calm her down and went over the files to double check and see if there really was an issue. Of course there wasn't.

Though Amelia's mind may be compromised by this tumor, she's still an incredibly capable surgeon and she's good at her job. One could argue that this tumor has possibly made her more daring in the kinds of surgeries she took on, but she knows what she's doing and not once did she put someone's life in danger on purpose.

Once she got past that, Dr. Webber told her that she needed to tell people about her tumor because they'd be upset to find out about it later. And, as always, he was right. Amelia started by telling Maggie, who was upset that Amelia waited so long to tell her but was slightly comforted by the fact that Owen and Meredith didn't know about it either.

Amelia then asked Maggie to be the one to break the news to Meredith, because Meredith constantly told Amelia she was "crazy" and Amelia didn't want to tell Meredith that she was right. Cue the tears.

After that was handled, Amelia then paged Owen so she could tell him the news, but at first he didn't want to hear it. When he arrived in the tech room, he was too distracted by his anger with Amelia to notice the scans. Instead, he ripped into her for paging him after he'd been trying to talk to her for so long. He was definitely right to feel upset, which is why Amelia let him get it all out, but then he saw the scans. Once he realized they were Amelia's you could practically see the anger leave his face.

Following that, Maggie told Meredith and then she later climbed into Amelia's hospital bed, spooning her as she seemingly waited for her surgery, while Owen sat nearby. In the preview for next week's episode, it's clear Amelia is gearing up for her surgery, and as she's prone to do, she's preparing for the worst. Hopefully, it doesn't come to that and Amelia makes it through her surgery just fine.