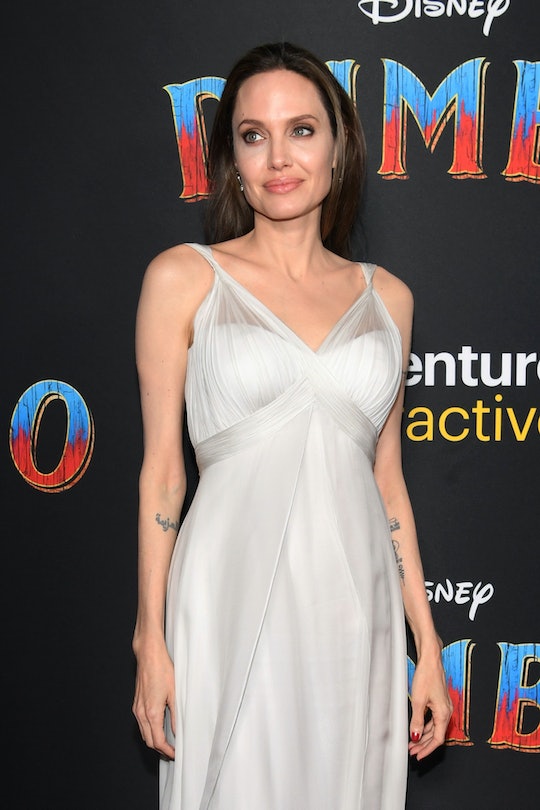 Will Angelina Jolie Run For Office? It Could Be A Possibility In The Future

She's a mother, an award-winning actress, a director, and an United Nations ambassador. So how does "President" sound in front of her much-printed name, or even "Senator"? No, this star may not actually be running for anything in 2020, but the future could be a different story. So, will Angelina Jolie ever run for office? According to a new interview, it doesn't sound like she's ruling out.

The question came up when People magazine interviewed Jolie for its new issue, asking about her long record of working with the United Nations, lecturing at the London School of Economics, and stumping for causes she believes in — such as the Preventing Sexual Violence in Conflict Initiative, which works to eliminate sexual violence as a weapon in warfare and is a cause she has been dedicated to since launching the initiative in 2012 with former Foreign Secretary Lord William Hague of Richmond, according to the initiative's website.

Public figures known for their intelligence who are seriously dedicated to world issues seem to often — these days, at least — turn to politics. And Jolie's answer to the entertainment magazine was an interesting one. "Never say never," Jolie, 43, told People, before adding, "right now I am looking to others for leadership."

OK, so while that's not a "Yes," it's not a "No, never," either. And haven't many candidates denied running for something... right before they did? So I'm not convinced we've seen the last of Jolie on this one. Then again, maybe it's just wish fulfillment.

You see, any mom who was forced to see Maleficent as many times as I was can tell you that her fierce-but-sympathetic turn as the outlawed fairy character is all the proof I personally need to know that she would fight for what believes, and she wouldn't be wimpy in a leadership role.

I honestly don't know why anyone would doubt that this lady would kill it as a politician. By the way, unlike so many who show up at a benefit once a year, Jolie has been working with the United Nations Refugee Agency for 18 years now, Vogue reported. That's a serious commitment to causes.

And don't forget, her main issues are women- or family-centered ones.

"If we went by the principle that those affected by a problem should be in charge of determining the solution, then the majority of the world’s peace negotiators, foreign ministers, and diplomats would be women," she recently said in her first address to the U.N.'s Peacekeeping Ministerial division, Vogue quoted her as explaining.

Jolie's passion for human rights work seems to have only been strengthened by being a mom. As People noted, the single star (who filed for divorce from Brad Pitt in 2017, as per Hollywood Life) juggles it all with raising six kids, Maddox, 17, Pax, 15, Zahara, 14, Shiloh, 12, and Vivienne and Knox, 10, from a Los Angeles base.

Being part of a greater solution is something she seems to have considered before: As the BBC reported on its Today program last December, she had an interesting answer for host Justin Webb when he asked about her interest in politics.

"If you asked me 20 years ago, I would've laughed," Jolie said. "I always say I'll go where I'm needed, I don't know if I'm fit for politics... but then I've also joked that I don't know if I have a skeleton left in my closet ... I'm also able to work with governments and I'm also able to work with militaries, and so I sit in a very interesting place of being able to get a lot done."

There you have it, guys, from the horse's mouth. You never know what might happen.