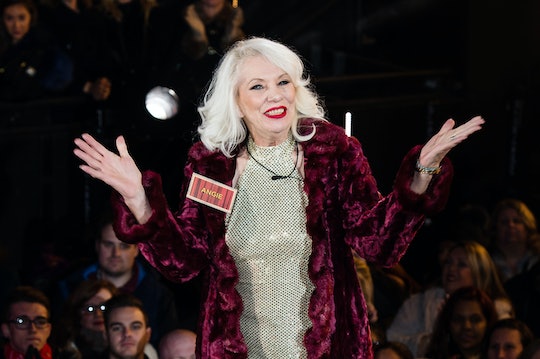 Music and pop culture icon David Bowie died of cancer on Sunday, but his ex-wife, Angie Bowie, wasn't given the news because she was participating in Celebrity Big Brother, where the participants have no connection to the outside world. After losing her ex-husband, will Angie Bowie stay in the Big Brother house? According to E!, she will. Because Angie was on Celebrity Big Brother, she didn't received news of his death until much later than the rest of the world.

Celebrity Big Brother requires all participants to live in a house together. Unless they're evicted, they don't leave for the duration of filming. The show released a statement regarding Angie's decision to remain on the series:

Following the very sad news of David Bowie's death, we can now confirm that Angie Bowie has been informed off camera by her representatives.

She has taken the decision to continue in the programme.

The decision to remain in the House is entirely her choice, and she has been given the option to leave at any time if she changes her mind. Appropriate support will be available to Angie at any time if needed.

David Bowie died on Sunday, according to a Facebook post on his official page. He fought cancer for 18 months and, according to his Facebook page, passed away peacefully "surrounded by his family." The news came only a few days after David debuted Blackstar, what would be his last album. The New York Times reported that the release date was David's 69th birthday.

According to Mirror, David and Angie Bowie were married for 11 years. In an excerpt from her autobiography published by Mirror, Angie wrote about experiencing David's talent:

He started playing me tapes of his music. A sense of ­amazement came over me.

And their author, sitting next to me on the bed, wasn’t just another pretty pop face (although, God knows, he was pretty), or for that matter just another rotten boyfriend.

This was a special man, different and great, one in a million or more.

Angie and David had a rocky marriage. When asked in a Celebrity Big Brother interview when she'd seen David last, Angie said, "Forty years ago? I go to great lengths to avoid him." Though she denies creating Ziggy Stardust, Angie is still credited with doing much to shape David's public persona. From costuming to publicity, Angie worked closely with David while they were together.

After his divorce with Angie, David remarried. According to People, David and supermodel Iman Abdulmajid were together for 25 years. David leaves behind two children: Duncan Jones (his son with Angie) and Alexandria Zahra Jones (his daughter with Iman).