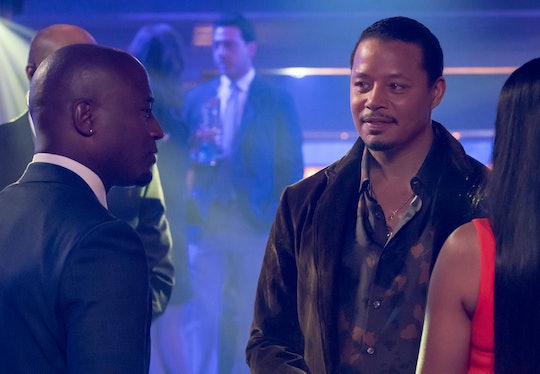 The 'Empire' Teaser Left Us Worried For Lucious

A storm seems to be brewing on Empire; Wednesday's episode, "Strange Bedfellows," seemed to be full of foreshadowing. Not only did we see a flashback of Cookie shooting one of Lucious' friends when she was a teenager, but we saw that she still carries a weapon. Hakeem also hired gun-toting bodyguards for his birthday party, and they weren't afraid to show them off. Given the pervasiveness of gun imagery — and the shadiness of Anika and Tariq — we suspect this is building up to a blow out. Will Anika kill Lucious on Empire? The teaser for next week's show left us wondering.

If I'm being honest, these weaving plotlines on Empire can be complicated. So, it's understandable to ask: what's going on with Anika? Well, besides the fact that she literally killed Andre's wife, Rhonda, in the season premiere (poor lady didn't even get a funeral), Anika is pretending to befriend Lucious' enemy and half-brother, Tariq, in order to gain his trust. She assured Cookie and Lucious that if she gets Tariq to fall for her and compromise his position as a cop, it could ruin any case he has against them in the eyes of a court. But is it possible that she'll decide to switch over to Team Tariq for real as time goes on? The promo definitely indicates that she'll have some kind of change of heart.

Earlier in the episode, Lucious was asked what dirt Anika could have on Cookie... and I'm curious as well. Lucious' mother is eager to kill Anika, but Lucious is hesitant. Anika tried to explain why she ran off, but Lucious and Cookie were quick to threaten her life if she slips. And judging from the preview of the next episode, this all may come to a head soon.

In the teaser, viewers see that Lucious is ill and in the hospital. He was coughing throughout this week's episode, so could this be related? Or could there be foul play of some sort. Anika may decide to take advantage of Lucious in his weakened state. Additionally, the teaser reveals that Anika and Lucious did not have a prenup. This means that if Lucious dies, Anika could get his fortune — or if they divorce, she'll get half. Lucious dying would be pretty profitable for her. Throughout the series, Anika has only acted in her best interest and has already committed murder, so this is not above her. I'll definitely be tuning in to see how this plays out.