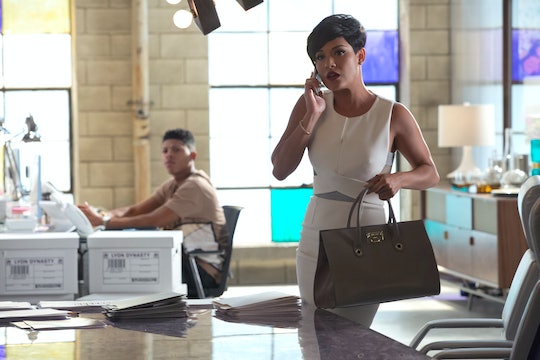 Will Anika Live On 'Empire'? This May Be The End Of Boo Boo Kitty

Fans were promised a death and they got one. . . sort of. In the finale few minutes of the Empire season finale Wednesday night, Rhonda and Anika came to blows on the top of the roof, rolling around and choking one another to death. In the final moments, the camera cut to a terrified Andre screaming "No," causing fans to believe one of the ladies met an untimely death. But did Rhonda come out on top or will Anika live on Empire?

OK, before we dive into the potential death of Anika, a little back story. Early on in the episode, Rhonda confronted her frenemy about pushing her down the stairs, causing her to lose her baby and the heir to the Lyon empire. Anika quickly denied the accusations and, much to viewers' surprise, the Lyon family quickly came to Boo Boo Kitty's defense. Yes, even her nemesis Cookie. Shocked, Rhonda confronted Andre and demand that he take care of Anika the way she took care of Vernon (murder by the way, for those who forgot.) Given his new religious ways, Andrew refused and Rhonda was forced to take things into her own hands. Literally. Rhonda unleashed her inner Cookie, slapping and choking Anika till she confessed to pushing her down the stairs all those months ago.

So which woman was left standing? Well, it's a little unclear. Even Empire's executive producer Ilene Chaken isn't sure who falls from the balcony. In an interview with Entertainment Weekly, Chaken confirmed that someone dies but couldn't give many details as to who. And not just because she's under contract. When asked what Anika's future would look like if she lives, Chaken said, "I can’t even answer that because I don’t even know whether she survives."

In another interview with TV Line, Chaken said she knew the season would end in a fight for quite some time. "We went back and forth over where exactly the show, this season, and that particular storyline should end," she said. "Lee [Daniels, co-creator of Empire], with his love of heightened drama and classic soaps, really, really wanted to go there [to the fight sequence], and in the end, I’m glad we did."

Of course, this type of finale means fans will be speculating Rhonda and Anika's fate till the fall. And, as much as I would love to see Rhonda come out on top, there are some signs pointing to Anika's survival. For starters, if Boo Boo Kitty were to stick around, producers would be able to play on the awkward family they created when Anika — who is pregnant with Hakeem's child — married Lucious. It would also allow them to draw out the stair incident a little longer, as Lucious told Anika he knew she pushed Rhonda. Not to mention, she is carrying the heir to the Lyon throne. And although the producers could kill of two babies in a year, would they really be so cruel?

"One of them is simply going to win the fight, and the other is likely to be gone," Chaiken told TV Line. "It’s in the hands of the gods, and whoever survives is going to have quite a story." And it's bound to be a story that gets viewers to tune in when Empire returns in the fall.