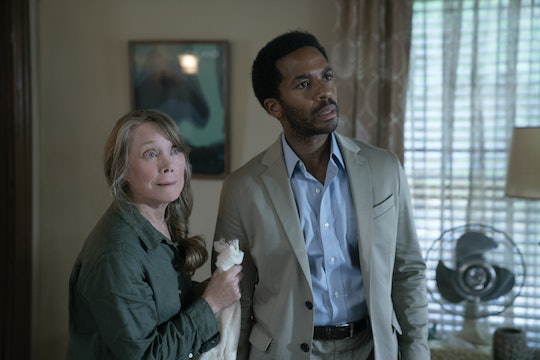 After a season full of intrigue, murder, and supernatural phenomena, the Castle Rock finale brought fans at least some closure. The finale ended with the deaths of some of the show’s most endearing characters, including Ruth Deaver (Sissy Spacek) and Alan Pangborn (Scott Glenn), who quickly became fan favorites. But in a town where alternate realities, time travel, and supernatural forces are constantly at play, fans are hoping to see their favorites come back for another season. So will any characters return for Season 2 of Castle Rock?

According to the show’s creators, Dustin Thomason and Sam Shaw, Season 2 will feature a completely different storyline, and they haven’t disclosed details about the cast or characters. “In terms of the anthology, each season is going to be its own self-contained story: beginning, middle and end,” Thomason told The Hollywood Reporter. “But I think that just as the books do, we want to surprise viewers with the ways in which the stories intersect. Just as the places the characters pop up in very unexpected ways throughout the books, that's the kind of anthology that we would like to tell.”

In a more recent interview with Esquire, Thomason revealed that upcoming seasons could involve different timelines, and that the future story lines would all come together to tell one larger story. This could mean you find a younger version of Sheriff Alan Pangborn — a character who was featured in numerous King novels — or his character from a different point of view.

“Each season gives us the opportunity to present a new story — whether it's jumping around in time and presenting a story set in the 1970s, a more classical monster story, or a totally naturalistic Stephen King kind of story,” Thomason told Esquire. “Even in an anthology, where you are going to point the camera in a slightly different direction and not necessarily see your main characters as your main characters, I think that it was important to us to feel like there was a kind of grand story that was building over these seasons.”

With stories intersecting and characters popping up, there is a chance you see your favorite characters again, but possibly not in the way you know them. However, the season finale ended with a mid-credits scene of Jackie Torrance (Jane Levy) writing a story about the murder she committed at the Castle Rock Bed and Breakfast in Episode 8. Jackie — who was revealed to be the niece of Jack Torrance from The Shining — titles her writing “Overlooked,” an obvious reference to the Overlook Hotel from The Shining. When asked by a local kid about the title, she hints at her future plans, foreshadowing a possible story arc for next season. “I’m actually headed out west on a research trip next month,” she tells him. “Best place to finish a book is where it started.”

Fans are hoping to see more of Jackie Torrance next season, and it would be amazing to see the show revisit the haunted Overlook Hotel, but as of now, there’s no way of knowing. When questioned by The Hollywood Reporter on a future season taking place at the Overlook Hotel, the show runners kept mum. “We would tell you, but then we'd have to kill you," joked Shaw, with Thomason explaining why they ended the season that way. “Stories are a really important part of what we set out to [explore] at the beginning, and ending on Jackie and her amusing interpretation of her story with the hopeful promise of something to come felt right to us."

So while the showrunners are making no promises, I wouldn't rule anything out just yet.