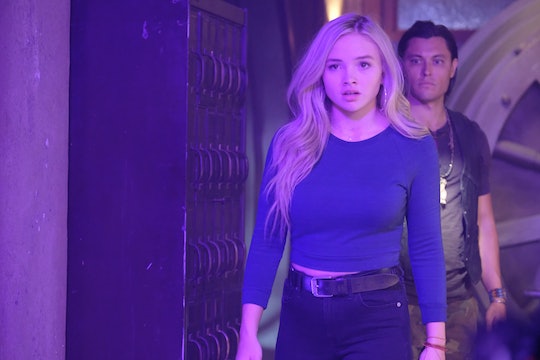 Will Any 'X-Men' Characters Be In 'The Gifted'?

An all new Marvel show is here! The Gifted premieres Monday night on FOX and while many Marvel fans are hesitant to give it a chance, so far the reviews seem to be good. The new series follows the Struckers, a family who goes on the run after it's revealed that the son and daughter are mutants. Since the show is centered around mutants, it's not surprising that many are wondering will any X-Men characters be in The Gifted? Unfortunately, although the show does take place in the same universe as the X-Men, there won't be any X-Men in the show... at least not yet.

According to The Washington Post, The Gifted actually takes place in an alternate reality in which the X-Men did exist, but they're no longer around for some reason. Thus, although the X-Men will be mentioned in the series, they won't be coming back from wherever they've gone off too. At least, not initially. Although many fans may feel disappointed about the lack of their favorite movie characters, the show's ability to separate itself from the popular mutants fans know so well, gives it the space to become its own entity.

While the series will focus on mutants, their abilities, and their need to stay on the run and out of the hands of the government, it's also very much about family. Reed Strucker, the father, prosecutes mutants for a living, which is why his children, Lauren and Andy, try to keep their mutant abilities a secret from their parents, along with everyone else. However, after an incident at school reveals the two siblings' abilities, Reed must decide whether to turn his kids in or go on the run. Thankfully, it's an easy choice for him to make.

Due to Reed's work as an attorney, he's actually familiar with a few mutants and goes to them for help. Though resistant at first, the Struckers and the other mutants will team up to save themselves and each other. Therefore, although this show will definitely be filled with action and awesome mutant fighting scenes, it'll also be a bit heartwarming as one family joins another.

The 10-episode first season has already received pretty good reviews ahead of the premiere. Though it hasn't reached the level of fanfare that Marvel's Netflix shows have, most critics can agree The Gifted is better than Marvel's other new show this season, Inhumans. The Gifted has been noted as having a "promising start" and hopefully it will only get better and better as the season continues on.

On average, Marvel shows have been successful, but with so many of them coming out each year — from Marvel's Agents of S.H.I.E.L.D. to The Defenders and Iron Fist and every other Marvel-centric show Netflix has churned out — it's getting harder and harder for there to be standouts. Even so, FOX's cable channel, FX, did find success with Legion, which also deals with a mutant character, earlier this year. Perhaps FOX can do the same with The Gifted and carve their own space in the Marvel Cinematic Universe.