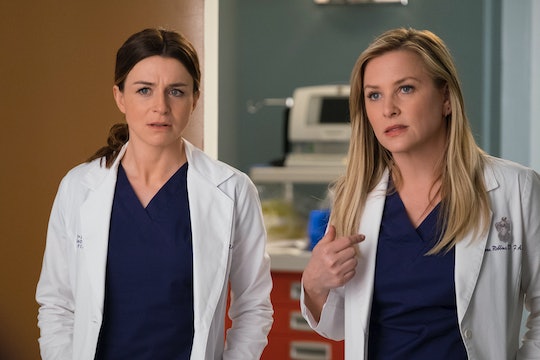 Arizona Has A Tough Choice To Make On 'Grey's Anatomy'

Grey's Anatomy is saying goodbye to two longtime, beloved ensemble members who both lent visibility to underrepresented communities on television. First, Sarah Drew, who plays April Kepner, will be leaving at the end of the season, and from the looks of previews, it definitely seems like she could have a fatal farewell. As for Jessica Capshaw, who plays Arizona, the odds of being killed off are quite slim — no one in Shondaland is interested in perpetuating the #KillYourGays trope. So will Arizona move to New York on Grey's Anatomy? It's one of a few possibilities for a sunny outcome.

The reason for Arizona's departure — apart from the fact that after nine seasons, any character's storyline has more than run its course in the writers' room — is her daughter Sofia. Arizona shares custody with her ex-wife Callie, who lives in New York. (Sara Ramirez left the show at the end of Season 12, when her character opted to move to the opposite coast.) Sofia bounces back and forth between New York and Seattle, which, for a 7-year-old, has clearly become unsustainable. She really loves her school, life, and friends in New York, while Sofia doesn't seem to be settling into her Seattle life as cozily. This season, she's been struggling with early signs of anxiety and depression, frequently feeling too sick to go to school. Arizona tries to mollify her with extra attention (playing hooky to take a break from school! one-on-one time! special join mom at the office days!), but Sofia just keeps feeling worse.

Ultimately, Sofia gets suspended from school for stealing her class's first grade field trip money ($1,200!) to try and buy a ticket back to New York all by herself. My heart can barely take it and she's a fictional character to me, so obviously, her mom Arizona realizes something needs to change if she's going to keep her child emotionally healthy. She decides Sofia needs to move back to New York and to the environment in which she thrives best. And, Arizona decides, she needs to go with her. But that choice isn't without complications.

Things are currently pretty serious for her and Dr. Carina Deluca, who a.) doesn't support "coddling" Sofia by rewarding her behavior outbursts, b.) doesn't seem particularly interested in coparenting or being a meaningful part of Sofia's life, and c.) doesn't want to move to New York. It seems like a pretty insurmountable obstacle, and I can't really imagine Arizona and Carina riding off into the sunset together.

Then, there's the maybe-nothing, maybe-foreshadowing fact that Arizona accidentally said Callie's name instead of Carina's when talking about her relationship after inadvertently ingesting weed cookies. Freudian slip much? But it doesn't feel super authentic to the characters at this point for Arizona to show up in New York, declare her love for Callie, and get back together with her. Also, there remains some question as to whether Ramirez left the show on good terms or not, and she's currently rocking a very different gender presentation than Callie's, which feels both too jarring to have go unexplained and awkward to go about explaining in the space of one episode, should Ramirez return to make this reunion happen.

My best guess for Capshaw's exit? I think the last we see of Arizona will be a tribute episode and heartfelt goodbyes as she boards a plane to New York with Sofia. It's the tender and respectful goodbye Arizona fans deserve, without shoehorning in any last-minute romantic plots.

The next episode of Grey's Anatomy airs on Thursday, May 10 at 8 p.m. ET on ABC.