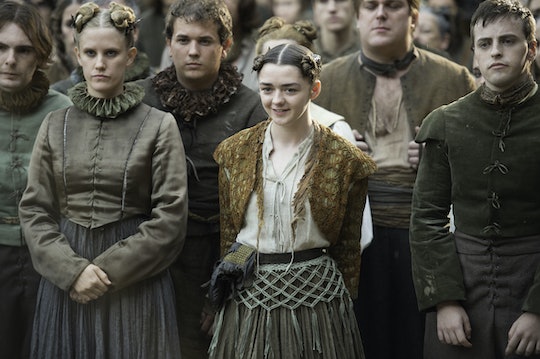 Will Arya Die On 'Game Of Thrones'? The Waif Just Wounded Her Pretty Severely

Fans knew The Waif has been itching to kill Arya ever since Arya failed to murder the actress Jaqen commanded her to kill. But will Arya die on Game of Thrones? Given the multiple stab wounds (and one knife-twist) The Waif delivered her, it's not looking good.

The Waif has never been Arya's biggest fan, not believing her to be capable of leaving her highborn status and family ties behind to become a Faceless Man. When Arya failed to follow kill orders, The Waif swiftly reminded Jaqen that he promised her she could kill Arya when she proved not to be worthy of The House of Black and White. He admitted that it was a pity, since she had such potential, but relented and commanded that Arya be killed. For what it's worth, he did instruct The Waif not to let A Girl suffer.

Last I checked, though, two stab wounds to the abdomen is not exactly the quickest way to die. Mere moments after Arya secured passage on a ship from Braavos back to Westeros, as she is enjoying a sunlit view of the water, a kindly old woman sneaks up on her and slashes her chest. Although she quickly gets Arya in a headlock, she does not slit Arya's throat, which is pretty much the only way to ensure quick death on Game of Thrones. Instead, she stabs twice and twists the knife once to deliver a couple of painful wounds that don't kill Arya right away.

Right after she stabs Arya, the old woman removes her face and reveals herself to be The Waif. Somehow, Arya manages to headbutt her, push her away, and dive over the side of the bridge and into the water. The Waif sees only blood bubbling up to the surface, so she runs away, assuming Arya is dead. But Arya soon surfaces and swims to shore. The last we see of her is Arya stumbling through the streets, clutching her multiple, bleeding wounds with no one approaching to help.

As we've learned coming this far together on Game of Thrones, though, if we don't actually see a character die, then their death is not to be presumed. Hopefully Arya finds a healer in Braavos quickly.