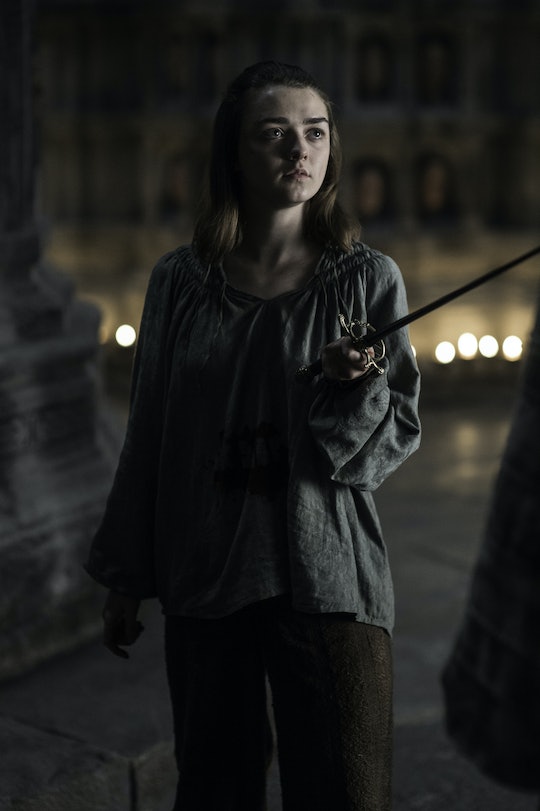 Will Arya Go To Winterfell On 'Game Of Thrones?' A Girl Is Heading Home

Episode 8 of Game of Thrones was all about Arya, aptly entitled "No One." After she killed The Waif, and hung her face in the hall, Jaqen H'ghar proudly told her, "A girl is finally no one." To which Arya replied "A girl is Arya Stark of Winterfell. And I'm going home." It was an exciting moment for all fans of Arya, eager to see a girl finally make her way back into the action in Westeros. But what exactly does Arya mean by "going home?" Will Arya go to Winterfell next? Or will she meet up with her friends somewhere else in Westeros? Personally, I'm just looking forward to seeing a girl do something other than get beat up by the Waif.

Fans of Game of Thrones are predicting that Episode 9 will be all about the battle for Winterfell, as the ninth episode of the show is typically the largest battle of the season, for example the Hardhome battle or the Battle of Blackwater Bay. If this is the case, viewers can get ready to see whatever army Sansa, Jon Snow, and Ser Davos have managed to scrounge together head to Winterfell for what will certainly be a bloody and classic underdog fight for the castle. If this were any other show, I would believe that our heroes would of course take back Winterfell. But this is Game of Thrones, in which is possibly more likely that the Boltons will win.

But what we really want to know is if Arya will make it back to the castle in time to help her siblings fight to take back their home. Though characters seem to be traveling improbably quickly lately (how did Danaerys get back to Meereen so fast?), it's still fairly unlikely that even if Arya does wind up back home at Winterfell that she'll make it in time for the battle. But I'm still crossing my fingers because nothing would be more satisfying for me than watching Arya with her newly minted assassin skills come and kill some Boltons. Nothing, that is, except another emotional Stark child reunion. We know that Sansa and Jon will most likely get a glimpse of their littlest brother Rickon in Episode 9. Is it too much to hope that they will also get to meet up with a grittier, meaner, and even less ladylike Arya as well?

Arya said she was going home, so she is probably headed to Winterfell, still unaware that it is currently occupied by Ramsay Bolton, the worst thing to happen to Westeros since Joffrey. Whether she makes it is an entirely different story. If she doesn't meet up with her brother and sister next episode, a girl can dream she will at least reunite with The Hound. Wherever Arya ends up next, Episode 9 is sure to be a doozy.