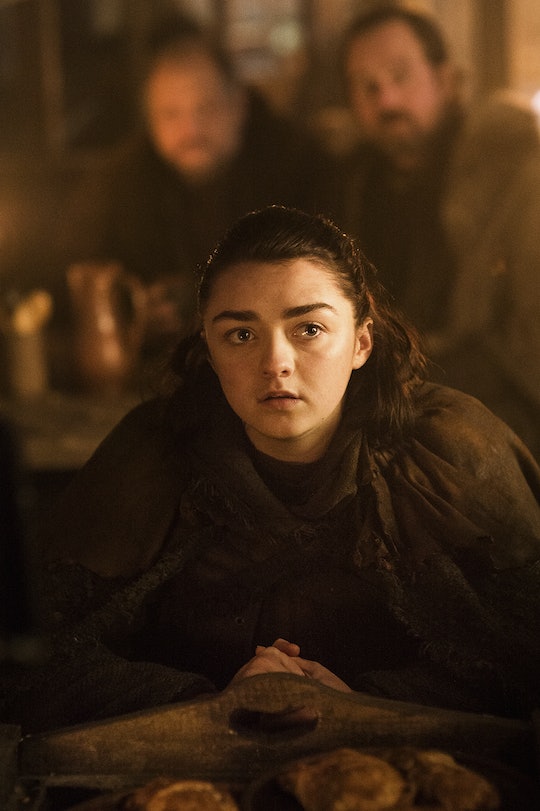 A Arya & Nymeria Reunion On 'GoT' Is Long Overdue

Game of Thrones is back for its long-awaited, heavily postponed seventh season and there's one recently revealed tidbit from the show's sound designer which has fans particularly excited. Showrunners David Benioff and D.B. Weiss told Entertainment Weekly for its annual Game of Thrones issue that one of the things fans can expect from GoT Season 7 is a "whole bunch of reunions." Meanwhile, Time Magazine's June cover story mentioned a wolf pack on the set of Game of Thrones during filming. Naturally, fans are dying to know what this means; will Arya and Nymeria reunite on Game of Thrones?

Sound designer Paula Fairfield spoke in a recent interview at Con of Thrones about her work on Season 7, stating: "The wolves have been an amazing thing. I've done all the direwolf stuff and there's a beautiful scene this season that I'm very proud of."

Of course, this could all be in reference to Jon Snow's direwolf Ghost, who is the only other surviving member of the litter adopted by the Stark children. However, the fact that there's reference to a pack of multiple wolves may point to Nymeria's return if we use clues from the books.

According to the text, Nymeria has been terrorizing the Riverlands with a pack of regular wolves whom she's apparently trained to attack and eat humans. It could explain why the show needed a pack of wolves for filming. But that's not the only piece of the puzzle generating buzz.

In the books, Arya can sometimes warg in and out of Nymeria in her dreams, much like Bran can on the TV show. It's during one of these scenes that Arya-as-Nymeria comes across the body of Catelyn Stark floating in a river. It's Nymeria who drags her out and makes it possible for Beric Dondarrion to resurrect Lady Stark as the silent, haunting, Frey-and-Lannister-slaying Lady Stoneheart. Could it be possible that Nymeria's return to the show also introduces Lady Stoneheart?

It's another element fans have been waiting for, but various folks involved with production have insisted that Lady Stoneheart is not going to be weaved into the television series. But even if viewers never see Catelyn Stark again, a reunion between Nymeria and Arya would mean that Arya is finally back in Westeros, after several long seasons of trying to find her way home. Jon and Sansa are reunited in Winterfell with the allegiance of The North behind them.

Might the Stark siblings finally all find their way back to each other this season? Tune into the season premiere of Game of Thrones July 16 on HBO to find out.