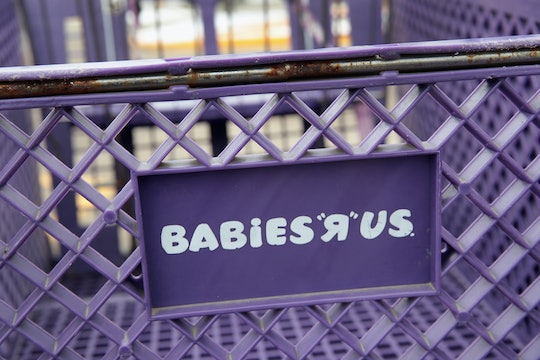 Toys "R" Us Will Reportedly Close All Of Its U.S. Stores, But What About Babies "R" Us?

Following reports on Wednesday that Toys "R" Us is reportedly closing all of its stores in the United States, according to the Washington Post, longtime shoppers and parents with gift cards and baby registries at its sister stores may be wondering if Babies "R" Us will close, too. The 70-year-old chain has not yet publicly commented on the reports and representatives for Toys "R" Us — Babies "R" Us' parent company — did not immediately respond to Romper's requests for comment.

Update: Toys "R" Us has confirmed that it will close all of its stores, including all of its Babies "R" Us stores, according to USA Today on Thursday. CEO David Brandon told staff during a speech that the Babies "R" Us registry and website would remain up and running for now.

Previously: There is still a lot to be addressed about the toy chain allegedly closing up shop, but what parents and expectant moms and dads should know is that if Toys "R" Us does indeed end up closing all of its stores in the United States, it's very likely that Babies "R" Us stores could be impacted as well. According to the Wall Street Journal, the reported closing and liquidation of the 880 stores across the nation would also include all Babies "R" Us locations.

Just last week, both Babies "R" Us and Toys "R" Us issued statements on March 9 via Twitter, letting shoppers know that its store doors were still open. "Our stores are open for business, ready to bring joy to children wherever we can, and to help new and expecting parents navigate raising a family," Babies "R" Us tweeted last week. In the following days, the company continued to tweet about products. Neither tweeted on Wednesday, March 14 or have issued official statements to the media regarding reports of shutting down.

The move reportedly comes after Toys "R" Us executives met with creditors and allegedly decided to "close or sell all of its remaining stores," according to The New York Times, which cited three people who were "briefed on the discussions."

We are confident that these are the right steps to ensure that the iconic Toys "R" Us and Babies "R" Us brands live on for many generations.

After filing for bankruptcy, the stores continued to be in operation until this past January when Toys "R" Us closed 180 stores in the United States across the Toys "R" Us and Babies "R" Us brand, according to TIME.

While many news outlets have reported that the toy giant will be closing its doors, it's not known exactly when this could happen or what exactly these reported closures mean for those who work at the remaining Toys "R" Us and Babies "R" Us stores located across the country. However, The New York Times reported on Wednesday that "liquidation sales will take place over the next few months, as the company clears the shelves at its roughly 880 Toys 'R' Us and Babies 'R' Us stores around the country."

Many people took to Twitter following the news, posing questions and concern about whether Babies "R" Us stores would be closing, too. Again, Toys "R" Us has not yet made an official statement about the reported closings and, as such, people were curious about the state of their baby registries and gift cards.

Still, on the day that Toys "R" Us filed for bankruptcy, Brandon said in a statement that he was looking forward to a "new era" at Toys "R" Us, according to CNBC. "Today marks the dawn of a new era at Toys "R" Us where we expect the financial constraints that held us back will be addressed in a lasting and effective way," Brandon said.

While so many questions about the reported Toys "R" Us closings remain, one thing is clear: many people are already mourning the potential loss of the toy and baby megastores.