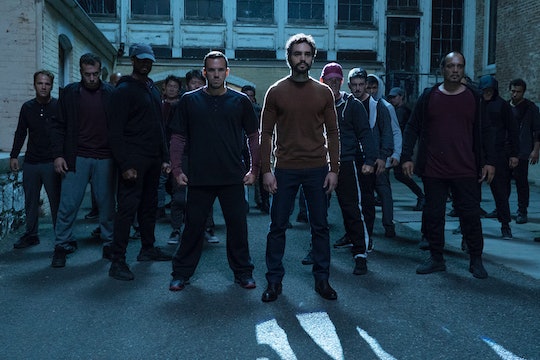 Bakuto Could Return For Revenge On 'The Defenders'

Though Colleen Wing's mentor Bakuto seemed like a good guy when he was initially introduced in Iron Fist, that was all a facade; he was actually a powerful member of The Hand who was looking to find new recruits to join their numbers. Though he insisted The Hand weren't the bad guys after all, anyone who had tuned into Daredevil knew better. At the end of Iron Fist Season 1, Bakuto was killed but his body went missing, making some wonder if he could still be out there somewhere. So will Bakuto be in The Defenders?

Death is far from irrevocable on these shows, especially when it comes to The Hand, and it appears that Bakuto's final farewell wasn't actually final at all. The second trailer for The Defenders shows Bakuto facing off against Colleen Wing, pitting her against her former mentor once again. It's not a big surprise that Bakuto is back, because part of what gives The Hand so much of their power is their ability to raise people from the dead. Bakuto won't even be the only antagonist brought back to life in The Defenders; the trailer also focuses heavily on the recently resurrected Elektra Natchios, who met her end in Daredevil Season 2.

It is still unclear, however, just how big a role Bakuto will play in The Defenders. As an important figure in The Hand, he will be presumably doing everything he can to thwart the efforts of the heroes as they try to bring an end to the evil group once and for all. But when your enemy can be brought back over and over again no matter how many times you kill them, it's a little difficult to eradicate them.

But there does seem to be at least one way to do it. Nobu Yoshioka was a major part of The Hand on Daredevil until Matt burned him alive in Season 1 — though Nobu was able to bounce back from that nicely thanks to the organization's easy access resurrection program (I wonder if it's like a froyo punch card? Eight resurrections and your ninth one's free?). However, at the end of Season 2, Matt's old mentor Stick decapitated Nobu and seemingly killed him — for real this time. Beheading could be the key to dispatching with members of The Hand.

Though he may be back for The Defenders, there's still a chance Bakuto could meet his demise before Iron Fist Season 2 kicks off.