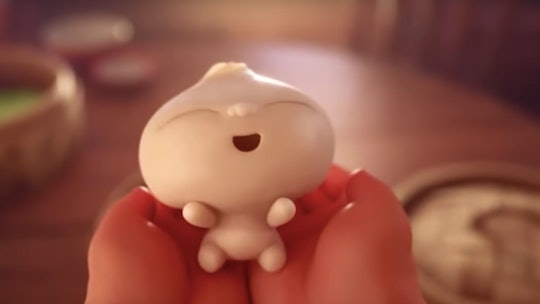 The World Is Loving The Sweet Pixar Short About A Baby Dumpling, But Will It Ever Become A Movie?

Chances are you've heard about Bao — the adorable Pixar short that plays before The Incredibles 2 — and how this little story about a dumpling is making moviegoers dig in their coat pockets and purses for a pack of tissues. If you've seen the sweet short film, you might be wondering if Bao will be made into a full-length movie one day, considering how much of a hit this nearly 8-minute long story has been so far.

It wouldn't be the first time that a short film has been turned into something bigger. For example, the 90s hit Office Space was once a short film, according to Mental Floss. That's not all; the 1988 short film, Tin Toy, is what ultimately inspired the creation of Woody, Buzz, and the whole Toy Story crew, according to The Wrap. And the reverse has happened with other feature-length Disney Pixar films. The movie Frozen, for instance, sparked the idea for the short film, Olaf's Frozen Adventure, which hit theaters last year. And Tangled Ever After is an extension of the Disney animated film, Tangled.

So, in theory, a full length Bao movie is not an outlandish idea. However, at the moment, Pixar has not released any plans for a feature-length version of Bao. However, if we all wish really, really hard, the Pixar and Disney gods might come through, right? Crazier things have happened...

For what it's worth, if any Pixar masterminds are reading this, it would be nice to flesh out more of the story behind Bao. If you're not familiar with the plot of the animated short, Bao is about a Chinese mother who's "an empty nester" and "discovers joy — and sorrow — when a steamed bun she makes comes to life," according to NPR. As The Press Herald put it, "She gets a second chance at motherhood when one of the dumplings she made comes to life as a tiny, giggly baby."

And because Bao was inspired from real life experience, there really could be so much to explore about this little dumpling, Asian culture, and mother-child relationships. The creative mind behind Bao, Domee Shi — who both wrote and directed to the short film, and is also the first female director of a Pixar short — told NPR in an interview that the story of this mother and baby dumpling's relationship actually comes from her own experience as a child of immigrants and her Chinese culture. As she explained to NPR of the film's inspiration:

I think I was probably really hungry one night, and I've always been a huge fan of classic fairy tales. And I wanted to do like a Chinese twist on "The Little Gingerbread Man" with a Chinese dumpling, instead of a little cookie, that comes to life. And I drew a lot of inspiration also from my own personal life. I'm an only child, and I feel like ever since I was little my Chinese mom and dad have always treated me like their precious little dumpling.

"Growing up I was that overprotected little dumpling for my Chinese mom," Shi, who was raised in Toronto, said in a separate interview with The Los Angeles Times. "... I just wanted to explore that relationship between an overprotective parent and their child with a dumpling as a metaphor, as weird as that sounds."

(Fun fact: In Chinese, "Bao" means both bun and baby, according to Fox News, which just makes the short film's title even more endearing.)

Though the Pixar short does not have any dialogue, as noted by Game Spot, if it were to ever be adapted into a full-length film, imagine all of the adorable conversations that the little steamed bun would have with his mom as it grows up. It's an adorable fantasy to think about, though the short film does have a rather dramatic ending.

Bao as a Pixar short had been in the works since 2015, so if a full movie were ever to be developed, it might be quite some time until moviegoers get to experience it. Whether Bao will become a full movie one day remains unknown for right now. But at this rate, the world seems more than ready for a more in-depth look at this little dumpling.