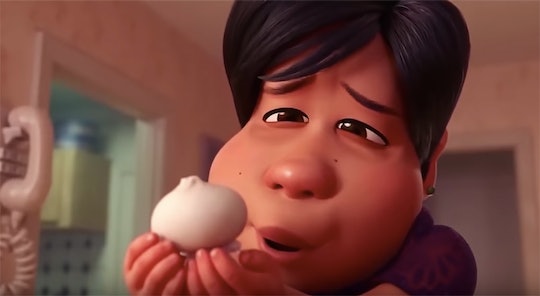 Will 'Bao' Be On Netflix? People Love This Heartwarming Short

It's no secret animated shorts are having a bit of a moment right now. Take Kobe Bryant's animated short film, Dear Basketball, for instance. The short — an ode to Bryant's emotional departure from professional basketball — received widespread acclaim and attention. In fact, Dear Basketball won an Oscar for Best Animated Short Film at the Academy Awards back in March. As for the latest animated short to receive positive reviews, look no further than Bao, a heartwarming story about a steamed bun that comes to life. The eight-minute film was produced by Pixar, and it plays before the start of Incredibles 2. And now that Bao has captured the hearts of families around the United States, there are a lot of questions about its future. Most of all, parents are curious about whether Bao will be on Netflix. Sadly, it's not clear what will happen next for this beautiful short.

If you haven't had a chance to witness the gem Bao yet, here's a rundown of its emotional plot. The short follows a Chinese mother who happens to be an empty nester. The parent gets a second chance at motherhood, however, when one of her steamed buns transforms into a little baby. (And when I say baby, I mean the bun sprouts adorable "legs," "arms," and a "face.") The magical steamed bun also makes typical infant noises, and the mom is immediately smitten with her surrogate kid. I don't want to give away the entire plot, but I'll just say many parents — no matter where they may be on their parenting journey — will need a tissue or two to get through this short. It's as adorable as it is heart-wrenching.

Needless to say, this unique and special story is resonating with a lot of families. And many people want to know when they'll be able to watch Bao again in the comfort of their own home. So, will Netflix pick up Bao anytime soon? Although Netflix did not immediately respond to Romper's request for comment about this possibility, I think it's safe to say the short won't make it to Netflix anytime soon.

For starters, Incredibles 2 just hit theaters 10 days ago, meaning Netflix won't be able to acquire it for at least a few months. That being said, there's also a possibility Netflix won't ever feature Incredibles 2, as the app doesn't yet have the original Incredibles. Hmm.

Either way, it's obvious there's a great demand for Bao to make its debut on a streaming service. People *love* this short.

"Yo can we just talk about the bao short that played before incredibles 2????" another commenter chimed in. "I’ve NEVER felt represented in that way before the cultural complexities of asian american households are rarely shown."

"The Incredibles hadn’t even started and I was already crying at the Bao short film," someone else agreed. "It was beautiful!"

While the overwhelming response for Bao should be enough for Netflix to consider adding it to the short films lineup, its director's inspiring story should also be a motivating factor. Domee Shi, the writer and director of Bao, is Pixar's first female director. It would be wonderful if Netflix gave Shi and her work additional exposure — the world needs more female directors, to say the least.

Of course, only time will tell if Netflix decides to pick up Bao. Given how many people love the movie, it would be a smart choice.