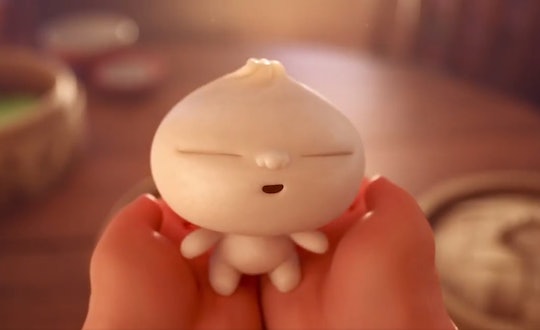 People Can't Stop Talking About 'Bao,' So Will It Ever Move From The Big Screen & To TV?

After years of waiting, audiences are thrilled to see Pixar’s extra-special super-powered family, the Incredibles, finally back on screens with a second movie. And as much fun as Pixar’s movies are, the short films that are usually attach just springboard the entertainment value. With Incredibles 2, the short is called Bao and it’s the story of a sentient dumpling and a mother longing for the past. But for anyone who can’t make it out to the theater right now, you might be wondering if Bao will ever air on TV once it's time on the big screen is over.

Pixar doesn’t seem to have a habit of bringing its short films to TV, so it’s doubtful audiences will ever get a broadcast viewing of Bao, but there has been one notable exception. In 2017, according to Collider, the short feature that aired before Coco, called Olaf’s Frozen Adventure, so frustrated audiences due to its length that Pixar pulled the short from theaters entirely. But, it then set up a TV showing of Olaf on ABC, as part of the network’s 25 Days of Christmas, according to Collider.

At first blush, it would seem that Olaf’s Frozen Adventure got special treatment because it was so great Pixar wanted to share it with everyone for free. But that wasn’t the case; according to Vox, theater audiences were actually responding negatively to the beloved Frozen character because he was around for too long — in a “short” film that ran 21 minutes.

Vox reported that the featurette “alternate[d] between grating and occasionally charming” and included no less than four original songs. Audiences who expected Coco were confused by what they were watching that some left the theater to ask if they were in the right movie, and some of those never went back, as reported by Collider.

If you're not familiar with the plot, the story centers on a Chinese woman who is dealing with the sadness of an empty-nest, according to HuffPost. When one of her dumplings comes to life, she is able to relive the experience of raising a cute little thing all over again, as HuffPost reported. But some audience members were seemingly confused by the storyline and cultural references.

Directed by Chinese-Canadian Domee Shi, Bao represents elements of the immigrant experience that seemed to have been lost on some viewers, according to Slate. The cute little dumpling grows up into a very Americanized version of a teen, brings home a blonde girlfriend, and exhibit behavior that run counter to the traditional values of the mother. Slate writer Inkoo Kang pointed out that the film includes nods to elements that are familiar to many who grew up in an Asian household, including a rice cooker, a calendar in Chinese, shrimp chips and that, for many immigrants, seeing their experience acknowledged on screen is both emotional and important for representation.

But Bao doesn't have the same elements as Olaf, a film that fit nicely into the television framework both in content (Christmas-themed) and in running time (about as long as an episode of Friends or Seinfeld). It’s unlikely that that Bao, which just eight minutes long, according to Quartzy, would find a TV home unless it were packaged together with some other kind of content, something that Pixar has seemingly never done.

In 2014, Forbes looked at the question of whether Pixar would expand to include television programming and, based on an analysis of its business model, came up with an answer of "no." As Forbes reported, Pixar aims to be a rare commodity, something that people consider an event experience, and TV just doesn’t provide that same allure.

But who knows, with the conversation Bao is creating around culture and inclusiveness, it could become an important player in changing Pixar’s strategy. Important enough to make them embrace a foray into TV? Only time will tell.

The good news is that Pixar does eventually release its shorts through on-demand services like iTunes, Google Play, and Amazon. Pixar also releases DVD compilations of shorts every few years and, with the latest one out in 2012, they should be due for a new one soon. So there's still a chance to see this sweet story (and do all the ugly crying) surrounded by the comforts of home.