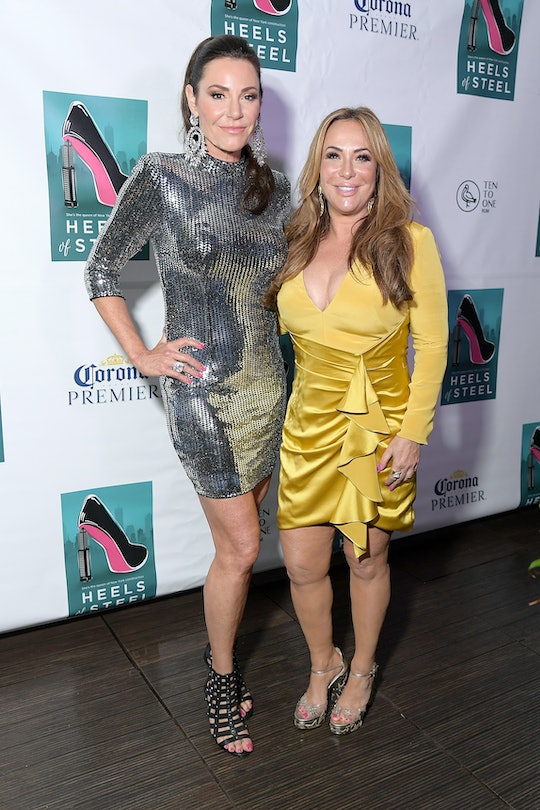 Barbara May Have Something To Say During The 'RHONY' Reunion

There was a new addition to Season 11 of The Real Housewives of New York City: Barbara Kavovit, who was there for all the fights, all the tears, and all the vacation table-dancing. She wasn't an official apple-holder, but she was making the most of being a Friend Of. So will Barbara be at the RHONY reunion? She witnessed every major moment of the season, so her perspective could be helpful when the other women are hashing things out with Andy Cohen.

She will attend, but it doesn't look like she'll be out on the couches for the entire length of the reunion special. Bravo released a seating chart that placed Sonja Morgan, Dorinda Medley and Bethenny Frankel on one couch, while Luann de Lesseps, Tinsley Mortimer, and Ramona Singer were on the other. There wasn't a spot for Barbara. That probably means that she'll only appear for a segment or two, like many Friends Of The Housewives and other special guests have over the years.

Though Barbara might be there in a limited capacity, it was confirmed by Bravo that she would definitely be present. They provided a look at all of the women's ensembles for the evening, and Barbara was among them in a floor-length, champagne-gold gown. She fit right in with all the rest of the glitter and sequins.

One lucky fan who admired the gown ended up being able to take it home for themselves. On her Instagram, Barbara announced that she would be donating her RHONY reunion dress to a fan "in need of a gown for a special occasion." She encouraged her followers to share the story of why they needed a dress; she would then pick a winner and ship anywhere in the country.

Barbara awarded the dress to a fan who couldn't afford finery for a work event, but also chose a second place winner to receive a different dress, as well as a third place winner who would get a tool kit and a copy of her book Heels of Steel. I hope that winning fan watches the reunion while wearing the dress in question, because I couldn't imagine a more suitable use for it.

Barbara had a little bit of trouble fitting in this season, which is usually the case for new cast members. The women of RHONY are a tight-knit group who have been amicably arguing at vacation houses for years at this point. It's not easy to break in when you're a newbie. It seemed like Barbara expected her close friend Luann to look after her among the group, but Luann was too busy repeating the word "cabaret" louder and louder until it drowned out all other sound.

Barbara did end up connecting with the other women while in Miami and ultimately seemed pleased with her time on the show. While talking to Page Six, Barbara remarked that she held her own pretty well, considering the circumstances. She also thought she added something important to the cast. "I think I am the voice of reason in that group," Barbara said. "You always need a voice of reason in a group of women that think they know it all."

Bravo hasn't announced whether or not Barbara will be back for Season 12, but perhaps that news will be shared during the reunion, which airs Jul. 11 on Bravo.