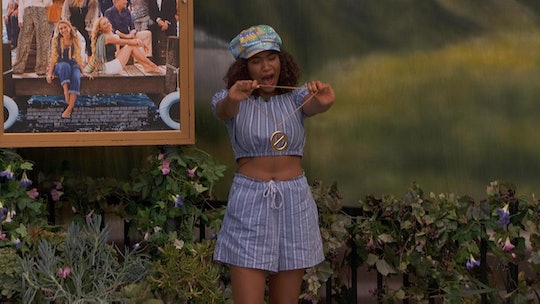 Each week a new head-of-household is crowned and this week the power is in Bayleigh's hands. Now that she's in charge and still has a power app at her disposable, some viewers are wondering if Bayleigh will win Big Brother Season 20? Unfortunately, she's not playing a smart game right now.

Prior to becoming the HOH, Bayleigh had a good position in the house. After her showmance partner, Swaggy C, was evicted she was gifted with a power app from America, which gives her the power to change a HOH's nomination without anyone else knowing she was the one making those nominations. However, after becoming HOH Bayleigh started making a lot of mistakes.

First, she was considering nominating Scottie, which didn't make sense since, despite voting to evict Swaggy C, he's still a vote for Bayleigh's side of the house. Still, JC's vote last week to evict Rockstar instead of Kaitlyn left everyone feeling suspicious and because Scottie flipped in the past he was the most likely suspect. Even so, the fact that Bayleigh was quick to trust Tyler over Scottie just showed how much power Tyler has in the house. Because somehow, despite only voting with Bayleigh's side of the house once, she still trusts him.

To make matters worse, Bayleigh then got into a heated discussion with JC during his one-on-one with her. And then she and Haleigh teamed up against Faysal, getting mad at him for trying to tell Bayleigh what to do during her HOH. They reaffirmed that the three of them have a Final 3 deal and JC should come second to that, but it was obvious Faysal wasn't happy about that whole talk at all.

Bayleigh's worst mistake though was telling Rachel about her power. For some reason Bayleigh believed that by telling Rachel about her power that would make Rachel feel more comfortable about going up on the block. It's unclear if Bayleigh actually believed that Rachel would keep this information to herself, but it seems highly unlikely that Rachel won't share this information with her side of the house, which includes Kaycee, Angela, Brett, and Tyler. This would then take away Bayleigh's element of surprise with the power app.

Besides being able to change nominations if she was nervous she or someone she cared about would be going on the block, the power app also gave Bayleigh the chance to cause drama in the house because no one else would know that she changed the noms. For example, if Tyler became HOH, Bayleigh could have changed the noms to be Angela and Kaycee, which would make his alliance members pissed at him and fracture their group even more.

However, now that Bayleigh's told Rachel about her power app, if Rachel tells everyone else they'll know that if the noms seem a bit wonky it was Bayleigh behind it. Thus, Bayleigh power app would just put a bigger target on her back because people in the house would know it was her who made those nominations, defeating the point of her power app.

With the way Bayleigh's been playing this week it's hard to see her making it all the way to the end. Her power app will only keep her safe for so long and once that's up it'll be difficult for her to remain on people's good side long enough to stay off the block. Additionally, although she won this HOH comp it was mostly luck and it's the only comp she's won thus far. So if Bayleigh does end up on the block the odds of her being able to take herself off the block are slim.

Perhaps Bayleigh will surprise viewers and get the target off her back after her time as HOH is over, but her odds of winning this game have definitely gone down this week.