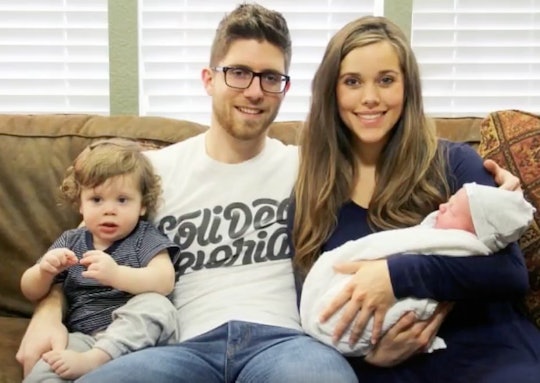 Will Ben Seewald Run For Office?

Is Ben Seewald, husband of Jessa Seewald — a member of the TLC television family the Duggars — getting involved in politics? Rumors abound that he will follow in his father-in-law Jim Bob Duggar's footsteps, and maybe get involved in the legislature in some way. Jim Bob, the father of 19 children of the TLC-famous clan, was an elected member of Arkansas House of Representatives from 1999 to 2002, and some fans are speculating that Ben may soon follow a similar path. So, will Ben Seewald run for office after all? Is the 21-year-old planning to step into politics?

Ben and Jessa Seewald met when they were 19 and 21, respectively, and have already had two children in the short span of their marriage. They recently welcomed their second son, Henry Wilberforce, on Feb. 6, and are also parents to 15-month-old son, Spurgeon Elliot. But it sounds like Seewald, when not helping with his and Jessa's two children, may be turning his attentions to politics as well. According to thehollywoodgossip.com, "If you follow Ben on social media, you may have noticed that his posts have become increasingly political in recent months."

With a former politician in the family, an interest in politics, and an associate's degree in political science from National Park Community College in Arksansas, perhaps Seewald feels prepared to enter the political career path?

The Duggars tend to lean very conservative when it comes to politics, but Ben hasn't proven to be quite as "right" on the political spectrum as the family he married into. According to Cafe Mom, Seewald, "hasn't shown political allegiance to President Trump like his brother-in-law Derick Dillard has, but he has shown that he's not entirely opposed to injecting his faith into the political arena."

Cafe Mom then included an Instagram post where Seewald said that only Jesus could "make America great again."

The oldest of seven children, Seewald lived in Hot Springs, Arkansas, before marrying Jessa and moving closer to her family. As aforementioned, he has studied political science, and technically has more education on the subject than, say, some of our current political leaders.

No one is quite sure what Seewald does when he's not taking care of the kids. If he does go into politics, it would certainly be a change for the little family. As Cafe Mom reported, if he's politically-minded, he could run for office in some capacity, or go the lobbying route like his brother-in-law Josh Duggar — who has been out of picture for any Duggar-related shows or appearances since his very public fall from grace.

With two young children — one not even a month old yet — Seewald would certainly have his hands full if he started a career in politics any time soon. If he does decide to pursue a political position, we will probably hear about it on TLC or one of the Duggar family social media accounts. Keep an eye out.