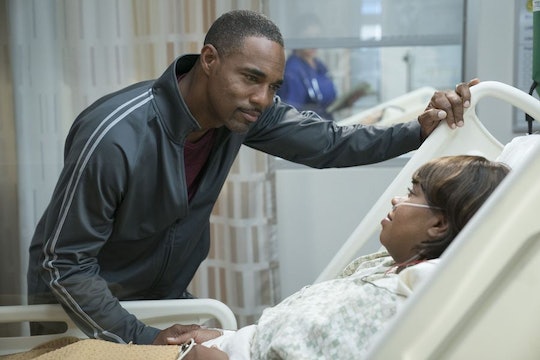 Ben Warren's Departure From 'Grey's Anatomy' May Not Permanent

Thursday night's episode of Grey's Anatomy introduced the newest leading lady in Shondaland, Andy Herrera, but many fans couldn't help but focus on Ben Warren who's departing the show for the new spin-off series, Station 19. So will Ben return to Grey's Anatomy? Thankfully, he'll almost certainly be back.

Thus it seems that although Ben is leaving Grey's, it was always planned for him to return, which makes sense since his wife, Dr. Bailey, is still a series regular on the show. But how often will Ben be dropping by Grey Sloan Memorial Hospital? After the most recent episode, he probably won't be back for a while.

When he and Andy showed up at the hospital with two young boys who were seriously injured by an explosion at home, Ben just couldn't find it in himself to leave. He stuck by one of the boy's side while Dr. Hunt and one of the interns worked on him, even offering up some unsolicited advice. He even went up to the OR to watch Dr. Bailey do surgery on the other kid, and despite being told by Dr. Webber to leave, Ben then took Andy up to watch Meredith's surgery, though Dr. Webber kicked them both out again.

It wasn't until he was sitting in Bailey's office when she broke down what his real issue was. Even though Ben had thought through his decision to stop being a doctor and be a firefighter instead, he didn't deal with the "feelings" that came along with that. Although Ben wanted to a firefighter, he didn't realize how hard it would be to leave his patient's at the hospital's doors and go back to work.

However, as always, a good talk with Bailey got Ben back on his feet and ready to head back to work with Andy. So even though Ben may miss being a doctor, it seems he's truly ready for his career switch now. Which begs the question, if and when he does pop on Grey's what exactly will he be doing? Just saying hi to Bailey at the hospital doors? Probably not. It's much more likely we'll see him at home with Bailey or out at the bar with his friends from Grey Sloan Memorial Hospital. And if he does stop by the hospital, he'll probably just be dropping by Bailey's office, and not trying to get back into the OR. Hopefully. I don't think Bailey could handle another career change at this point.

So if you love Ben as much as I do, you have nothing to fear. He's not done with Grey's yet. However, if you really want to keep up with what he's doing you should definitely watch Station 19. Who wouldn't want to see Ben in his firefighter uniform on a weekly basis? I know I would. But besides seeing Ben, Andy already proved that she's a fierce character and that she'll be fun to watch. If she could be so badass in an OR, a place she's not at all familiar, imagine how great she'll be running a firehouse.

You have a little time to think about it, since the Station 19 premiere doesn't air until Thursday, March 22, but it'll definitely be a must watch. Besides, you'll already be watching Grey's, so why not watch the spin-off too?