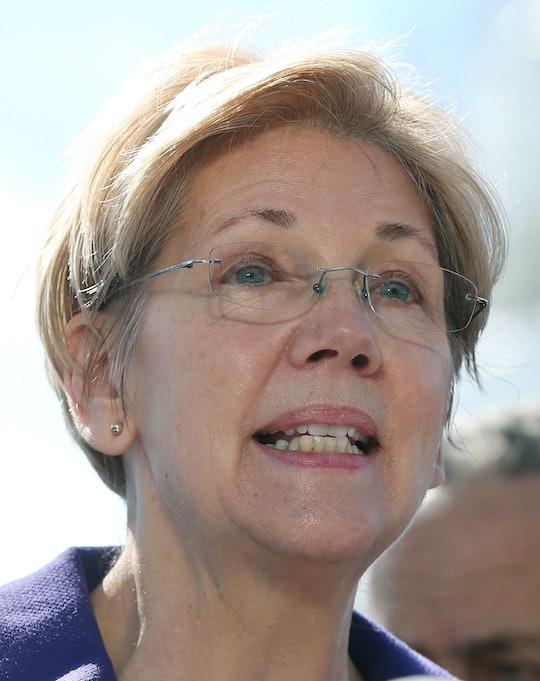 Will Bernie Sanders Choose Elizabeth Warren As His VP? He Could, If He Wins The Nomination

As the Democratic convention in July inches closer and with the end of primary season nigh, it's only natural to start to wonder who the candidates will end up choosing as their running mates. On Tuesday, Vermont Sen. Bernie Sanders hinted that he might choose Elizabeth Warren as his vice president. It was the first time, after months of speculation, that Sanders mentioned the Massachusetts senator by name, and left Warren's biggest supporters cheering.

But wait — calm down, all you left-leaning Democrats starting to squeal with delight: Sanders only hinted that the Warren would be his pick on MSNBC's Morning Joe Tuesday morning. He said that he wasn't going to commit, but added that a woman as vice president was something he believed the country needed. When asked to brainstorm about a few, Warren was right on the tip of his tongue, though he tried to protest that it was too early to "speculate."

"But I think, as you know, there are people in life today, Elizabeth Warren, I think, has been a real champion in standing up for working families, taking on Wall Street," he said. He explained that she wasn't the only qualified candidate, though. "There are other fantastic women who have been active in all kinds of fights who I think would make great vice presidential candidates," he added.

The fact that Warren is a woman and shares Sanders' liberal political views makes her a very attractive choice for a potential running mate.

But does Warren even want the gig? Early in 2015, many believed that Warren herself would make a run for president. There was even a grassroots movement to urge her to run, but the Democratic senator put all of those rumors to rest. She ruled out a campaign, saying that she said she valued her role in Washington as a senator, where she had a chance to "make a difference on things that really matter.” Still, being a vice president, despite the Veep-like tropes in pop culture, could be a role in which Warren could continue plugging away at the things that matter, while still serving as an important figurehead to the party.

Former Secretary of State Hillary Clinton also said that she would consider a female running mate if she won the nomination, despite the fact that her shortlist includes a lot of men, according to The New York Times. Sen. Warren, though, might not be her first choice, especially since Warren has not endorsed Clinton nor been "helpful" to the Clinton campaign.

Warren has made her career on regulating Wall Street, and Clinton takes campaign money from banks, so it doesn't seem like an obvious fit. Though like most things in politics, a narrative could be spun. Having someone like Warren on her ticket would greatly benefit Clinton and buy her some street cred with the #FeeltheBern crowd.

It doesn't seem likely that Clinton will run with another female, though. But Sanders most certainly could (and should). First, of course, he has to get the nomination, which is looking all the less likely in the lead up to Tuesday's primaries. In addition to floating ideas about VP choices, Sanders also said today that his path to victory is "narrow" since Clinton seems to have a major lead with the Democratic super delegates. Either way, Sen. Warren would be a great addition to any campaign. Whether she'd rather stay put in the Senate is another story.