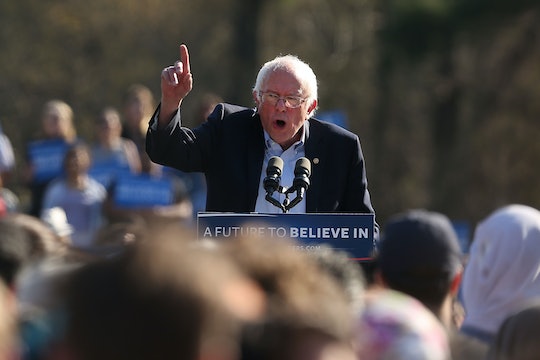 Will Bernie Sanders Drop Out If He Loses New York? He's Vowed To Stay In No Matter What

The Democrats' New York primary was supposed to be a blowout for the state's former Senator and former Secretary of State Hillary Clinton. Vermont Sen. Bernie Sanders' campaign came out Monday with a warning that polls, which show Clinton leading by 13 points, are underestimating Sanders' support in the Empire State. But is that just posturing to keep momentum going? And if predictions are true, will Bernie Sanders drop out if he loses New York? Two words: no way.

Sanders, his campaign, and his surrogates have been clear all along — the Democratic socialist Senator is going to stay in this race all the way to the convention. And why shouldn't he? In an amazing disruption of politics-as-usual, the Sanders campaign has broken every record imaginable for fundraising from individual donors. In March alone, Sanders raised a whopping $44 million. To put that number in perspective, consider the Clinton campaign only raised $23.5 million last month. With cash pouring in this fast, two things become clear: first, people want Sanders to stay in the race, and, second, he can afford to go the distance, regardless of what the polls say.

And if the crowds Sanders continues to draw in New York are any indication, maybe polls are underestimating his Tuesday performance. Sanders drew nearly 30,000 people to Prospect Park over the weekend, according to New York Magazine.

But Sanders' commitment to see the campaign through until the convention in July isn't just a symbolic move. His campaign continues to say it sees a path for Sanders to win the nomination if he can compete in strategic primaries with Clinton and pick up enough delegates to convince party-loyalist "super delegates" he's not just for real, but the best chance for Democrats to beat Donald Trump in the general election.

According to the Associated Press, Clinton currently holds a 1,756 to 1,068 delegate lead over Sanders in the final sprint to pick up the 2,383 delegates necessary to secure the Democratic nomination.

"We're running stronger against Donald Trump and other Republicans than Secretary Clinton," Sanders said this weekend on Meet The Press. "I think we stand a really good chance to do well in New York State, in Pennsylvania, and as we head into other states."

And even Sanders' opponents don't always seem staunch in their opposition. George Clooney and his wife, internationally-recognized attorney Amal, just raised millions for Clinton and Democrats. But, during a speech at a fundraiser, Clooney said he likes Sanders and hopes he stays in the race.

"I think what he's saying in this election is important if you're a Democrat," Clooney said. He went on to add, that if Sanders does wrap up the nomination that he would do "whatever he can" to help elect Sanders. Things aren't looking as bleak as the numbers say they are.